Another dialogue session. Again the presidential crisis was not discussed 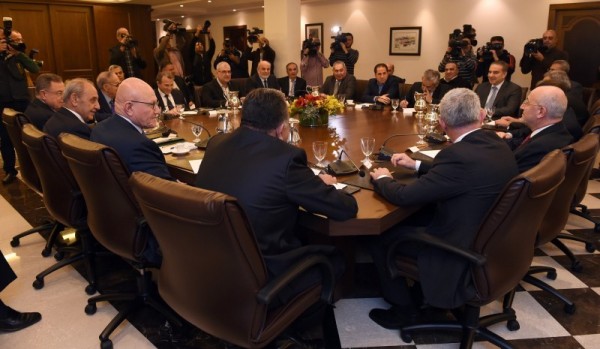 Asked why by reporters, he replied: “Speaker Berri was the one steering discussions.”

He added that he is still running for the presidency, revealing that “his house is still open” to rival candidate Change and Reform bloc chief MP Michel Aoun.

Aoun was represented by his son-in-law Foreign Minister Gebran Bassil who left without making any statement.

Jumblatt compared the dialogue talks to the democratic system of Iran.

“It appears that Lebanon’s national dialogue has started to resemble Iran’s council for diagnosing the regime.”

Jumblatt ridiculed on Wednesday the democracy in Iran,” citing the recent exclusion of the grandson of the founder of the Islamic Republic Ayatollah Ruhollah Khomeini, from contesting elections next month.

The PSP leader said via Twitter: “Given its ‘democratic’ record, perhaps Iran does not want the election of any MPs Henri Helou, Suleiman Franjieh, or Michel Aoun as president.”

“It is strange that Khomeini’s grandson is unwanted, but this is democracy in its highest form in the Islamic Republic,” he added sarcastically.

“The password to ending the presidential impasse is in the hands of Iran’s Supreme Leader Ayatollah Ali Khamenei,” Jumblatt concluded sarcastically.

The next dialogue session was set for February 17.