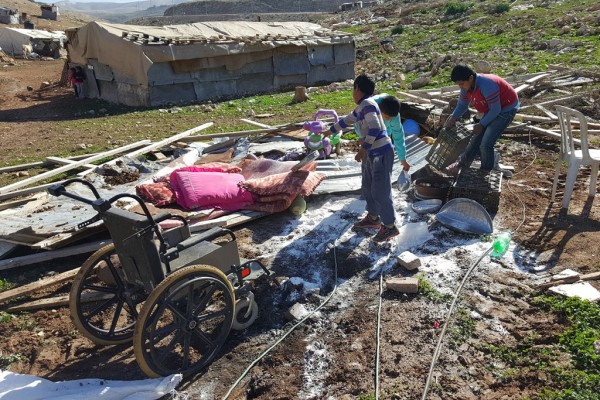 Israeli authorities demolished Bedouin homes in the vulnerable community of Abu Nwar, Area C, near East Jerusalem in the West Bank. Photo: UNRWA
Share:
– Amid ongoing violence in the Middle East, United Nations Secretary-General Ban Ki-moon reiterated today that he can understand why Palestinians are losing hope in the face of nearly 50 years of Israeli occupation, a statement that has provoked criticism that he was “giving terror a tailwind.”

“Young people especially are losing hope,” he told the opening today of the 2016 Session of the UN Committee on the Exercise of the Inalienable Rights of the Palestinian People, a day after going before the Security Council to condemn Palestinian attacks against Israeli civilians, highlight growing Palestinian frustration, and call on Israel to change its settlement and other policies.

“They are angered by the stifling policies of the occupation. They are frustrated by the strictures on their daily lives. They watch as Israeli settlements in the occupied West Bank, including East Jerusalem, expand and expand. They are losing faith in their own leadership to deliver genuine national reconciliation and see the dream of a sovereign, contiguous and independent Palestinian state slip away.

“But life hasn’t changed. And some Palestinians wonder: Is this all meant to simply run out the clock? They ask: Are we meant to watch as the world endlessly debates how to divide land while it disappears before our very eyes?”

After yesterday’s speech, Israeli Prime Minister Benjamin Netanyahu was reported in the media to have said: “The words of the UN secretary general give a tailwind to terrorism.”

“The Secretary-General rejects the language that accused him of ‘giving terror a tailwind.’ Anyone is free to pick and choose what they like or dislike from the Secretary-General’s speeches; words can continue to be twisted, but the grave reality cannot,” he added.

Mr. Dujarric stressed that Israelis, Palestinians and the international community need to read the writing on the wall: the status quo is untenable, it undermines the security of Israelis and the future for Palestinians.

In his speech today, as he did yesterday, Mr. Ban categorically condemned the stabbings, vehicle attacks, and shootings by Palestinians against Israeli civilians.

He noted that he had repeated the “firm position” of the UN that Israeli settlements are illegal under international law, threatening to destroy the two-state solution, and that he had highlighted the need for the Palestinian leadership to oppose incitement, improve governance and reunite Gaza and the West Bank under a single legitimate Palestinian Authority.

“All of these points need to be said and they need to be repeated,” he said today. “If we hope to see an end to this violence, security measures will not be enough – we must address the underlying frustration and failure to achieve a political solution.

“The United Nations is committed to working to create the conditions for the parties to return to meaningful negotiations,” he added, stressing that the one and only path to a just and lasting solution involves an end to the occupation, leading to a sovereign and independent State of Palestine, living side by side in peace and security with the State of Israel.”

That is the two-state solution that the diplomatic Quartet – comprising the UN, European Union, Russia and the United States – has been promoting for 15 years.

In his speech to the Council yesterday Mr. Ban also stressed that while upholding the right of Palestinians to self-determination, “questioning the right of Israel to exist cannot be tolerated.”