New York tells Cruz “Drop Dead Ted ”, as bromance between him and Trump is over

The war of words between presidential candidates Donald Trump and Ted Cruz spilled onto the GOP debate stage, ending the “bromance” the two men once shared.

In the spin room following last night’s Republican presidential debate in North Charleston, South Carolina, Trump told ABC News he was “a little bit surprised” by his confrontation with Cruz.

When asked if the one-time “bromance” between the two men was over, Trump said, “I guess it is.”

Cruz’s campaign said that Cruz was the only candidate to confront Trump on the debate stage and walk away a winner.

For months, the two men have openly praised each other. When Trump took hits from GOP rivals about controversial comments about illegal immigrants, Cruz defended him. The Texas senator often mentioned to the press that Trump was a friend. The two men even held a private meeting last summer vowing to not let presidential politics get in the way of their friendship.

Cruz would often tell the media that he wasn’t interested in a “cage match” with Trump. But after days of attacks by Trump on Cruz’s faith and questions about whether he is a natural born citizen, Cruz took the gloves off and landed his biggest public punch on Trump. Cruz let loose after being asked whether his Canadian birth to an American mother makes him ineligible to be president.

“Back in September, my friend Donald said he had his lawyers look at this from every which way and there was no issue there. There was nothing to this birther issue. Now since September, the Constitution hasn’t changed, but the poll numbers have,” Cruz said. “I recognize that Donald is dismayed that his poll numbers are falling in Iowa.”

Trump has raised questions in recent days about whether Cruz is a natural born citizen, a requirement to be president of the United States. He’s suggested that Cruz should get a declaratory judgment to avoid any legal challenges from Democrats about his eligibility.

Cruz told Trump last night that he wouldn’t be taking any of his legal advice soon. He also attempted to debunk birther questions by arguing that Trump’s logic could exclude the real estate mogul himself from the White because Trump’s mother was born in Scotland. Trump retorted, “But I was born here.”

Trump admitted on the debate stage that Cruz’s rise in the polls had something to do with him putting niceties aside.

“Now, he is doing a little bit better. No, I didn’t care before. He never had a chance. Now he is doing better. He’s got probably four or five percent chance,” Trump said.

Both men traded barbs about choosing each other as their vice presidential pick.

“I choose him as my vice presidential candidate and the Democrats sue, because we can’t take him along for the ride. I don’t like that. Okay?” Trump said.

Trump said he’d rather go back to building buildings. 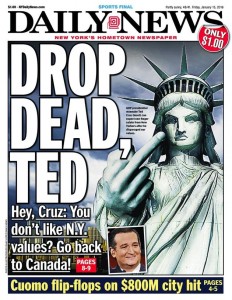 He told debate moderators that New York values “are socially liberal or pro-abortion or pro-gay marriage, focus around money and the media.”

Cruz went further, saying, “Not a lot of conservatives come out of Manhattan.” That was a dig at Trump’s attack on Cruz’s faith that “not a lot of evangelicals come out of Cuba.”

Trump went on the offensive, invoking the terrorist attacks of 9/11 to describe the resilience of New Yorkers.

“New York is a great place. It’s got great people, it’s got loving people, wonderful people. When the World Trade Center came down, I saw something that no place on Earth could have handled more beautifully, more humanely than New York,” Trump said. “I have to tell you, that was a very insulting statement that Ted made.”

Some New Yorkers agree. Cruz’s remarks got the cover treatment of the New York Daily News with a headline that said “Drop Dead Ted.”