“No window of opportunity at the moment”, says Lebanon minister 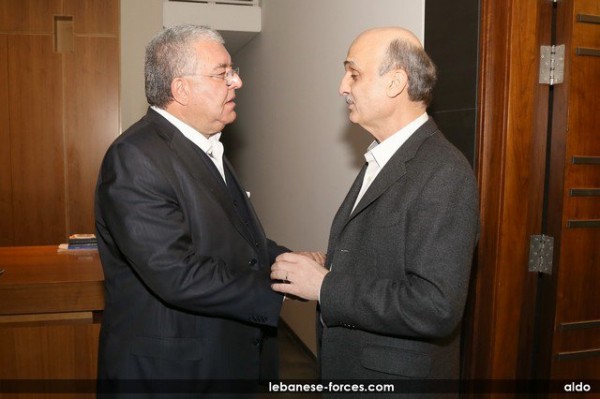 Lebanese Interior Minister Nouhad al-Mashnouq met  Tuesday with Lebanese Forces leader Samir Geagea and revealed  that the election of a president needs a “regional-international decision that is not available now.”

“The visit is part of the necessary consultations with the Dr. Geagea but we must all admit that the country is going through several and not one political storm,” said Mashnouq after his two-hour meeting at Geagea’s residence in Maarab.

“The discussions focused on the need for patience and calm and for finding mutual solutions, given the common and long political history between us,” Mashnouq added.

In response to a reporter’s question, the minister revealed that the talks did tackle reports suggesting that Geagea might soon endorse Change and Reform bloc chief MP Michel Aoun’s presidential nomination.

“That’s why I said that we are going through  a period of political storms that require caution and that we don’t need further confrontations,” Mashnouq went on to say.

Asked whether it is possible to elect a president soon, the minister noted that “the election of the Lebanese president requires a regional-international decision that is not available at the moment.”

“There is no window of opportunity at the moment and the internal dialogue will not lead to the election of a new president unless it is accompanied by a regional-international decision. The problem is in the decision not in dialogue,” Mashnouq added.

“The regional-international decision for the election of a president is not ripe at the moment, despite all of what is being said in this regard,” he stressed.

Geagea  on the other hand was quoted as telling Mashnouq later on Tuesday  that “no matter what happens  on the presidential issue  Saad Hariri and Future Movement  will always come first in the LF’s calculations.”

Media reports have suggested that Geagea might soon announce his support for Aoun’s presidential bid in response to  Hariri’s nomination of Marada Movement chief MP Suleiman Franjieh for the country’s top Christian post.