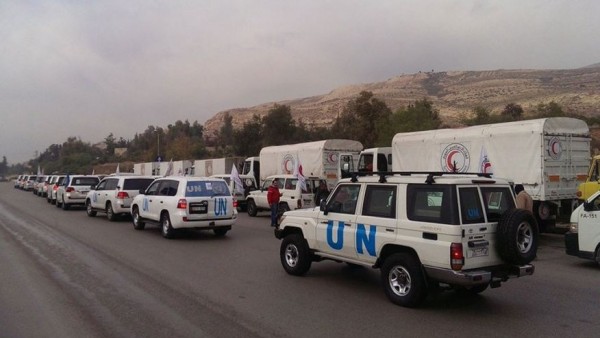 A humanitarian convoy on its way to the besieged Syrian town of Madaya. (Photo: OCHA Syria)
Share:

United Nations officials have officially launched  their biggest-ever appeal for humanitarian aid to cope with the spiraling Syrian refugee crisis amid growing donor fatigue and renewed Russian air attacks that are making the humanitarian disaster worse.

The appeal asks global donors to ante up $9 billion for Syria and surrounding countries for 2016, a $600 million hike from the appeal goal last year — a goal that came nowhere near being met.

The U.S. donated $1.6 billion to the humanitarian cause for Syria and the region in 2015, bringing the total U.S. aid contribution for the overall crisis to some $4.5 billion since it began in 2011. A U.S. State Department official told Fox News the Obama administration’s contribution this year is likely to be “similar” to the 2015 tally.

No one else has been feeling anywhere near as generous, a fact that is much on the mind of world leaders as they prepare for a donors’ conference in London in early February to come up with the cash to start funding the appeal.

They also hope to begin thinking of longer-term solutions to the swelling disaster, which has now spilled well beyond its regional origins onto European shores, and is unlikely to abate for years.

At the moment, however, long-term realities have to face an ugly short-term fact: the cash for coping with the humanitarian black hole of Syria’s disaster simply hasn’t been there.

Overall, last year’s Syria regional appeal, which also was unprecedented in size, was not even half-funded, a shortfall due in part to the limping state of many European economies, and also to a sudden hike in what the U.N. calls its most drastic “Level 3” humanitarian disasters, in Iraq, South Sudan and Yemen, as well as the Syrian civil war.

Together with a flood of lesser humanitarian crises, the U.N. is asking for some $20.1 billion to meet humanitarian needs around the world in 2016, more than double the $8.8 billion asked for worldwide in 2012. Last year, the U.N. asked for nearly as much on a global basis, $19.9 billion, and came up $9.6 billion short.

Much of the huge escalation in demand for cash, and the resultant shortfall, has been due to the deadly environment of Syrian dictator Bashar Assad’s Russian- and Iranian-backed war against his own people, compounded by rising tides of Islamic extremism and the terrifying incursion of ISIS.

Some 4.7 million people are now estimated to have fled the country, mostly to Lebanon, Turkey and Jordan — including the tide of some 300,000 refugees that have reached Europe — and “they are not going home any time soon,” as a State Department official put it.

Internally, some 6.5 million more have been displaced. Overall, the U.N. estimates that some 13.5 million people still in Syria require humanitarian assistance and protection — and, adds the State Department official, “it could get worse.”

In fact, that already could be happening, according to military experts monitoring the violence inside the country.

They note that after a brief slowdown, the tempo of air attacks by Russian warplanes dispatched to Syria in recent months to support the Assad regime is rising again in areas held by anti-Assad rebels.

One of the aims, says Chris Kozak, a Syria expert at the Washington-based Institute for the Study of War, is to “change the facts on the ground” in advance of peace talks between the opposing sides that were announced over the weekend by U.N. special envoy Staffan de Mistura, which are supposed to begin in Geneva on January 25.

Kozak noted that much of the recent air warfare has been aimed at “stabilizing front lines” for the Assad regime around Syria’s biggest cities, Damascus and Aleppo. Most of the activity has been aimed, like previous waves of  Russian air strikes, at regime opponents like the Free Syrian Army, which is backed by the U.S. and its regional allies, rather than at ISIS extremists that Russian President Vladimir Putin also claims to oppose.

Other observers have noted that Russian air attacks have made use of anti-personnel weapons such as cluster bombs and “dumb” bombs that have significant margins of error in hitting targets. According to Kozak, the air strikes, which have hit civilian facilities including a hospital, at a minimum show Russian lack of concern with displacing civilians, and perhaps more.

“Part of the overall strategy of the Syrian regime has always been to depopulate rebel-held areas to deny them political legitimacy,” Kozak observed. “Part of the Russian calculation is that if you can turn up the military pressure, this is a direct pressure point as you come to the negotiating process.”

Saying that he had heard unconfirmed reports that “refugee flows are increasing because of the Russian strikes,” Kozak added:  “I am almost certain part of the calculation is that refugee outflows also apply pressure to other Russian adversaries, such as Turkey” –which has taken in some 2 million Syrian refugees — “as well as weakening and dividing Europe.”

In other words, the rising bill for refugees may now be a factor in Russian military policy in Syria as well.

John Bolton, former U.S. Ambassador to the U.N. under George W. Bush (and also a Fox News contributor), agrees that “in part, what Putin is aiming to accomplish is to say to Europe, ‘We can solve your refugee problem, too’ and he clearly sees that as connected to persuading Europe to relenting on sanctions in Ukraine, for example.”

Kozak suspects that the Russian military pressure could also be intended to further fracture the anti-Assad opposition and perhaps even prevent the promised peace talks from convening — and that part of the solution to the ongoing disaster is that “we really need to stand up to Russia. The U.S. really needs to take a side.”

Analysis of the power politics behind the still-metastasizing refugee crisis in the Middle East, however, does not form part of the ongoing U.N. discussions about the need for more cash to alleviate the disaster. What the future holds on that front is more meetings.

Indeed, the upcoming international donor gathering in February is only the prelude to a series of high-level meetings that world leaders intend to hold in coming months to deal with the global refugee crisis, culminating in a long-planned U.N.-sponsored World Humanitarian Summit in Istanbul in May.

That gathering, in the sanitized language the U.N. favors for such occasions, intends to “set a forward-looking agenda for humanitarian action to collectively address future humanitarian challenges,” and to “build a more inclusive and diverse humanitarian system committed to humanitarian principles.”