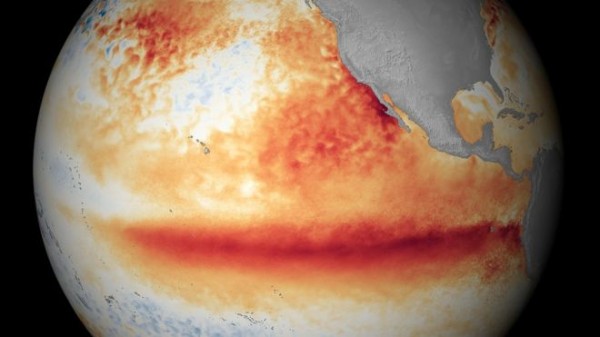 El Nino has contributed to making 2015 the warmest year on record and will continue to influence in 2016
Share:
The strongest El Nino on record is likely to increase the threat of hunger and disease for tens of millions of people in 2016 aid agencies say.

The weather phenomenon is set to exacerbate droughts in some areas while increasing flooding in others.

Some of the worst impacts are likely in Africa with food shortages expected to peak in February.

Regions including the Caribbean, Central and South America will also be hit in the next six months.

This periodic weather event, which tends to drive up global temperatures and disturb weather patterns, has helped push 2015 into the record books as the world’s warmest year.

“By some measures this has already been the strongest El Nino on record, it depends on exactly how you measure it,” said Dr Nick Klingaman from the University of Reading.

“In a lot of tropical countries we are seeing big reductions in rainfall of the order of 20-30%. Indonesia has experienced a bad drought, the Indian monsoon was about 15% below normal and the forecasts for Brazil and Australia are for reduced monsoons.”

As both droughts and floods continue, the scale of the potential impacts is worrying aid agencies. Around 31m people are said be facing food insecurity across Africa, a significant increase over the last year.

Around a third of these people live in Ethiopia where 10.2m are projected to require humanitarian assistance in 2016.

The UK’s Department for International Development says it is providing emergency support for 2.6m people and 120,000 malnourished children. They say they will provide 8m people with food or cash support from January 2016.

“If we fail to act now against this especially powerful El Nino, we will fail vulnerable people across our world,” UK International Development Minister Nick Hurd said in a statement.

“Ensuring security for those affected by El Nino is important to their countries but also in Britain’s national interest. Only by protecting and stabilising vulnerable countries can we ensure people are not forced to leave their homes in search of food or a new livelihood.”

According to the UN around 60m people have been forced to leave their homesbecause of conflict.

Aid agencies like Oxfam are worried that the impacts of the continuing El Nino in 2016 will add to existing stresses such as the wars in Syria, South Sudan and Yemen.

They say that food shortages are likely to peak in Southern Africa in February with Malawi estimating that almost 3m people will require humanitarian assistance before March.

“Millions of people in places like Ethiopia, Haiti and Papua New Guinea are already feeling the effects of drought and crop failure,” said Jane Cocking, from Oxfam.

“We urgently need to get help to these areas to make sure people have enough food and water.

“We cannot afford to allow other large-scale emergencies to develop elsewhere. If the world waits to respond to emerging crises in southern Africa and Latin America, we will not be able to cope,” she said.

While many parts of the developing world will more directly feel the ongoing impacts of El Nino, the developed world will see impacts on food prices.

“It takes some time for the impacts of El Nino to feed through to social and economic systems,” said Dr Klingaman.

“Historically food prices have gone up by 5%-10% for staples. Crops like coffee and rice and cocoa and sugar tend to be particularly affected.”

The El Nino event is likely to tail off into the spring – but that may not be good news either.

El Ninos are often followed by La Nina events, which can have opposite but similarly harmful effects. Scientists say during an El Nino there is a huge transfer of heat from the ocean to the atmosphere. Normally, as in 1997/98, that heat transfer tends to be followed by a cooling of the ocean, a La Nina event,

“It’s possible but far from certain that this time next year we could be talking about the reverse of many of these impacts,” said Dr Klingaman.

“In places where we are seeing droughts from El Nino we could be seeing flooding from La Nina next year.

“It’s just as disruptive, it’s just the other way round.”