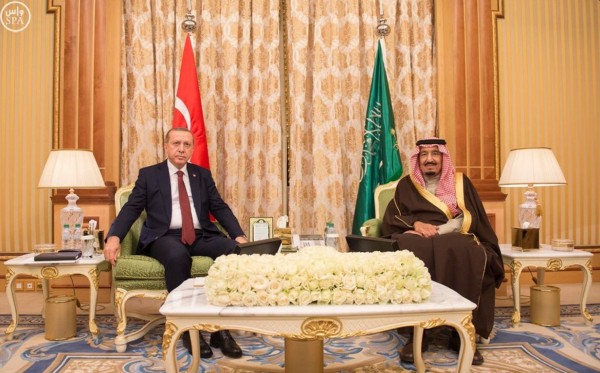 In this picture released Tuesday, Dec. 29, 2015 by the office of the Saudi Press Agency, Turkish President Recep Tayyip Erdogan , left, and Saudi King Salman bin Abdul Aziz Al Saud, right, pose for a photo during their meeting in Riyadh, Saudi Arabia. Erdogan is in town for talks focused on the civil war in Syria.Turkey and Saudi Arabia are strong backers of the Syrian Sunni opposition fighting to oust the Iranian-backed Syrian President Bashar Assad from power. (Saudi Arabian Press Agency via AP) (Associated Press)
Share:
Saudi Arabia and Turkey agreed on the need to set up a “strategic cooperation council” to stengthen military, economic and investment cooperation between the two countries, Saudi Foreign Minister Adel al-Jubeir said on Tuesday.

“The meeting produced a desire to set up a high-level strategic cooperation council between the two countries,” Jubeir told a joint news conference with his Turkish counterpart after talks in the Saudi capital, Riyadh, between Saudi King Salman and Turkish President Tayyip Erdogan.

He said the council will deal with security, military, economic, trade, energy and investment between the two countries.

Erdogan was speaking to reporters before departing for Saudi Arabia, where he met King Salman for talks focused on the Syrian civil war and energy cooperation. Turkey and Saudi Arabia are strong backers of the rebels fighting to overthrow Syrian President Bashar Assad, who is supported by Russia and Iran.

Erdogan said his government and Saudi Arabia are working “in solidarity and consultation” to find a political solution for Syria, as both countries push for an agreement that would remove Assad from power.

The two sides were expected to discuss energy cooperation as Ankara works to diversify its supplies following a rift with Moscow over the downing of a Russian plane.

The Saudi Press Agency confirmed the two leaders discussed the conflicts in Syria and Iraq, as well developments in war-torn Libya and Yemen, where Saudi forces are battling Shiite rebels.

In comments apparently directed at Russia’s military intervention in Syria, Erdogan said: “You cannot go anywhere by supporting a regime that has mercilessly killed 400,000 innocent people with conventional and chemical weapons.”

Russia began airstrikes in Syria on Sept. 30, saying it wanted to support the Syrian government and defeat Islamic State militants and other extremists. But many of the strikes have hit Western-backed rebel groups in areas where IS is not present, and Syrian activists say the Russian strikes have killed civilians.

The U.N. has stopped counting since reporting last year that 250,000 people have been killed in the nearly five-year Syrian conflict, and some 12 million people displaced, triggering a massive refugee crisis. What began in 2011 as mainly peaceful protests inspired by the Arab Spring eventually spiraled into an armed conflict pitting rebels against the military, drawing in global powers as well as extremist groups like IS and al-Qaida.

Though Kurdish fighters are among the strongest forces on the ground in Syria battling the IS group, Erdogan told reporters before arriving in Saudi Arabia that countries backing the Kurds are “adding fuel to fire.” Turkey considers the Kurdish forces in Syria terrorists because of their links to an outlawed Kurdish rebel group in Turkey.

When Saudi Arabia hosted a meeting of major Syrian opposition groups this month, the main Kurdish militia known as the YPG and the largest Kurdish group, the Democratic Union Party or PYD, were not invited.

This is Erdogan’s third visit to Saudi Arabia this year. He flew to Riyadh in January to attend the late King Abdullah’s funeral and again in March for bilateral talks with King Salman. The two leaders also met at the G-20 summit held in Turkey last month.

Saudi-Turkish ties were strained under the late king Abdullah, who saw Turkey’s support of Egypt’s Muslim Brotherhood group as a destabilizing threat to the region. Ties between the two countries have since improved under the new monarch Salman, who has worked closely with Sunni countries to stymie the reach of Saudi Arabia’s top regional foe, Shiite Iran.

Turkey is a member of the 34-nation Islamic military alliance that Saudi Arabia announced this month.