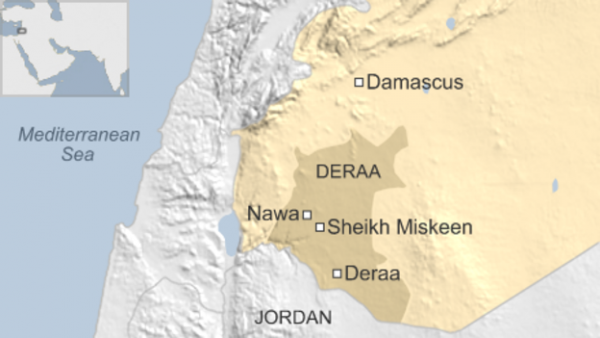 Syrian troops fought their way into a rebel-held town in the southern province of Deraa on Wednesday in an assault which rebels said was supported by the heaviest Russian aerial bombing campaign so far in the south.

Troops were in Sheikh Miskeen’s main square and had taken over the eastern and northern neighborhoods of the town which lies on a major supply route from the Syrian capital, Damascus, to the city of Deraa, the army said in a statement.

A rebel source confirmed troops had entered parts of the town and said fierce clashes were raging in the eastern neighborhood known as the Masaken – an area of dozens of apartment buildings that formerly housed top army officers.

A commander in a leading rebel group fighting in the area said the heavy Russian bombing on their posts, where rebels had counted at least 100 raids in the past two days, had been decisive in tipping the balance against the rebels.

“This is the heaviest Russian bombing on the side of the regime in Deraa and without it the army, which faces manpower shortages, would not have made these gains,” said one commander from Jabhat Thuwwar Souria, a group involved in the fighting.

Rebels from an array of groups – some of them backed by Western powers and including the Islamist Muthana group – fought back against the offensive near a former air base north of the town of Sheikh Miskeen, insurgents on the ground told Reuters.

The army assault on Sheikh Miskeen is part of the government’s first major offensive in southern Syria since Russia joined the fight on Sept. 30 to support its ally President Bashar al-Assad.

Its recapture would consolidate the army’s hold over the heavily fortified region which has formed a southern line of defense protecting Damascus.

Russia, which did not confirm the strikes and has up to now concentrated on the northwest and coastal areas, has said it is primarily targeting hardline Islamic State fighters.

Washington and other regional powers have regularly accused it of striking other anti-Assad rebel groups, seen as more moderate, that some in the West hope will form part of a future settlement of the near five-year war.

The army took the Brigade 82 base from the rebels on Tuesday, lost it as bad weather set in, and took it once more overnight with the support of the air strikes, said rebels.

Syria’s army said it had made advances overnight against insurgents who it said were mainly al Qaeda inspired groups.

Sheikh Miskeen, the main goal of the army’s southern campaign, lies on one of the main supply routes from the capital Damascus to the city of Deraa, close to the border with Jordan.

Securing the town would allow the army to press further south in mainly rebel held towns such as Ibtaa, Dael and in Ataman near Deraa city.

Rebels from another mainstream anti-Assad armed opposition alongside some Islamist groups said they shelled army posts in the city of Izraa, a main government held town that has major fortifications and is based to the east of Sheikh Miskeen.

Activists and residents say Russian air strikes, in which missiles and bombs are launched from a high altitude, are distinct from Syrian air force strikes which rely more on barrel bombs dropped from helicopters flying at a lesser height.

Rebels still control large parts of the region, that also borders Israel, but have been largely on the defensive since their failed offensive in June to take the government-controlled part of Deraa city.

The south is the last major stronghold of the mainstream, anti-Assad opposition, who have been weakened elsewhere by the expansion of the ultra-hardline Islamic State group in the east and north, and gains by the Nusra Front in the northwest.