Dozens killed, injured in airstrikes on fuel market in Syria 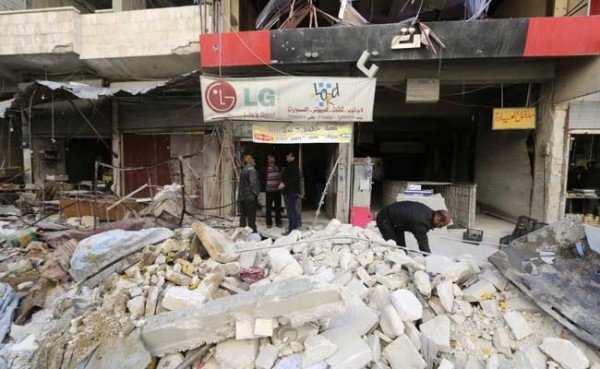 The warplanes also struck a popular market in the northern village of Maskaneh that is under the control of the ISIS group. (File Photo)
Share:
Airstrikes on a fuel market in a rebel-held village in northern Syria killed and wounded dozens on Tuesday and destroyed several tanker trucks, two Syrian opposition monitoring groups reported.

Opposition activists said warplanes also struck a popular market in the northern village of Maskaneh that is under the control of the Islamic State group, killing at least 18 people and wounding many others.

It was not immediately clear whose warplanes carried out the strikes, although the monitoring groups said the Russians targeted both markets.

The fuel market in the village of Maaret al-Naasan mostly sells diesel brought from areas under the control of the Islamic State group. The airstrikes on the market are likely part of a campaign to target the oil trade that is a major source of income for IS. The extremist group controls nearly half of Syria.

Russian warplanes as well as those of the U.S.-led coalition have destroyed hundreds of tanker trucks that are used to ferry oil from fields under the control of IS in eastern Syria to other parts of the country. The warplanes have also struck oil facilities in the eastern province of Deir el-Zour in recent weeks.

The Local Coordination Committees said Tuesday’s airstrikes on Maaret al-Naasan were carried out by Russian warplanes and that they killed and wounded dozens of people.

The Britain-based Syrian Observatory for Human Rights said the airstrikes killed 16 and wounded dozens more. The Observatory’s chief Rami Abdurrahman said the warplanes were believed to have been Russian.

“This is part of the campaign against Daesh,” Abdurrahman said, using the Arabic acronym for the Islamic State group.

An amateur video posted online showed firefighters extinguishing the blaze in the market. Another video taken from outside Maaret al-Naasan showed thick black smoke billowing from the area shortly after the airstrike.

The video appeared genuine and corresponded to other AP reporting of the events.

Although other insurgent groups in Syria have been fighting against IS, fuel has been flowing from areas controlled by the extremists into rebel-held territory in return for other commodities such as vegetables and fruits.

Demand for diesel has been on the rise in northern Syria to fuel heaters during the winter; the attacks on oil facilities and tanker trucks have sharply increased the price of diesel.

The other airstrikes targeted a popular market in the village of Maskaneh in the northern province of Aleppo. The Observatory said 18 were killed and dozens wounded while the LCC said 25 people perished.

It is common to have conflicting figures on the immediate aftermath of airstrikes or bombings in Syria.

Meanwhile in Moscow, U.S. Secretary of State John Kerry called Tuesday for the United States and Russia to find “common ground” on contentious differences over ending Syria’s civil war, saying the world benefits when great powers agree in their approaches to major crises.

Russia and the U.S. are at odds over the mechanics of a political transition aimed at halting the war in Syria, as well as the military approach to fighting IS.

Russian Foreign Minister Sergey Lavrov noted “outstanding issues” on steps in the Syrian political transition that is supposed to bring representatives of President Bashar Assad’s government together with the opposition for negotiations by early January.

Hezbollah is an ally of Assad and has sent thousands of fighters into Syria to back Assad’s forces.
ASSOCIATED PRESS