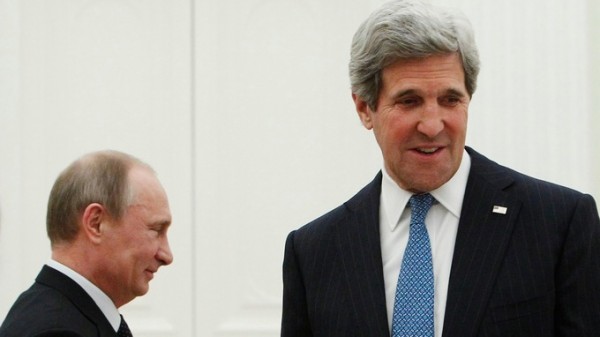 US Secretary of State John Kerry and Russian President Vladimir Putin found common ground at Syria talks in Moscow Tuesday but the US remains concerned that Russia is targeting the “moderate opposition” and not primarily the Islamic State (IS) group.

“I made clear about our concern that some of Russia’s strikes have hit the moderate opposition and not Daesh,” Kerry said, using another term for the IS group.

Russia, one of Syrian President Basher al-Assad’s staunchest allies, has launched a campaign of air strikes it says are aimed at Islamic State group militants but which also support Assad’s forces.

Kerry said he told Putin the Kremlin needed to direct its fire on “the real threat” of Islamic State group rather than on the moderate opposition.

“I am pleased to say President Putin took that under advisement,” said Kerry, adding Putin himself had stressed the need for military coordination to avoid possible problems.

Russia’s defence ministry said Tuesday that its planes had carried out air strikes to support four rebel groups in Syria, saying it was working to try to unite the efforts of the Free Syrian Army and government troops against Islamic State group.

But Western diplomats say they are sceptical of such assertions.

Peace talks to go ahead

Russia and the United States said they did see enough common ground on Syria for world powers to meet on the troubled country’s peace process in New York on Friday, but views on the future of Assad still diverge.

Kerry went into meetings with Putin and Foreign Minister Sergei Lavrov on Tuesday not knowing whether Moscow would veto a third round of international talks on Syria on Friday after the Kremlin spoke of preconditions needing to be met. But speaking afterwards, he said the talks would definitely take place after the two countries agreed to try to accelerate the peace process and a potential political transition.

“We will meet this Friday, December 18, in New York with the International Syrian Support Group and then … we will pass a UN resolution regarding … the next steps with respect to negotiations and hopefully a ceasefire,” said Kerry.

He said the two sides had found some common ground, a sentiment echoed by Lavrov.

“Despite our countries’ differences, we have demonstrated that when the United States and Russia pull together in the same direction, progress can be made,” Lavrov told reporters.

He called the talks with Kerry “substantive”, saying the two countries were now moving in the same direction on Syria.

Moscow has long disagreed with Washington over Assad’s fate, insisting that only the Syrian people, and not external powers, should determine his future. The United States believes Assad must step down as part of any viable transition.

Kerry said the transition period in Syria — according to the 2012 Geneva agreement — would be about six months.

But in Tuesday’s talks, the two sides did not focus on their differences or what could or could not be done immediately about Assad but on the political process, Kerry said.

Some progress was made when it came to agreeing which Syrian rebel groups should be regarded as terrorist organisations and which should take part in the peace process, he added.

Before the talks, the Russian foreign ministry had issued a statement saying Washington needed to rethink its policy of “dividing terrorists into good and bad ones”.

“We reached some common ground today in agreement with respect to the complexity of this issue of terrorist groups,” said Kerry.

“We certainly narrowed down our own thinking about the complexity of how one can manage that, we obviously agree that ISIL/Daesh and [al Qaeda-linked] al-Nusra are absolutely outside of this process no matter what.”

Kerry’s visit follows a meeting last week in Saudi Arabia which agreed to unite a number of opposition groups, not including Islamic State group, to negotiate with Damascus in peace talks.

A 34-member secretariat established at the Riyadh meeting is expected to meet later this week to decide matters, including who will chair it.

The secretariat, which includes armed factions and members of the political opposition, will also pick a negotiating team for talks with the government, though it is not certain that will happen this week.

Assad last week rejected the idea of talks with armed groups, appearing to further diminish the chances of negotiations beginning in line with a January 1 target date. “It seems ambitious,” said a senior Western diplomat.

Tuesday’s Moscow talks touched too on the creation of a new Saudi-led Islamic alliance to fight terrorism which will share information and train, equip and provide forces if necessary for the fight against Islamic State group.

Lavrov said Moscow wanted more precise information from Riyadh about the initiative.
Mohamad al-Mansour, a Free Syrian Army commander and head of the Jaysh al-Nasr group, said armed groups were ready to continue the war if the peace talks the United States and Russia were trying to broker went nowhere.

“We are ready [for negotiations], based on the principles [agreed in Riyadh],” he told Reuters.

“[But] if the regime rejects it, so be it. From our side, we have used and will continue to use necessary military force.”

FRANCE 24 with REUTERS and AFP