A Germany vs Netherlands Soccer match called off over bomb fears 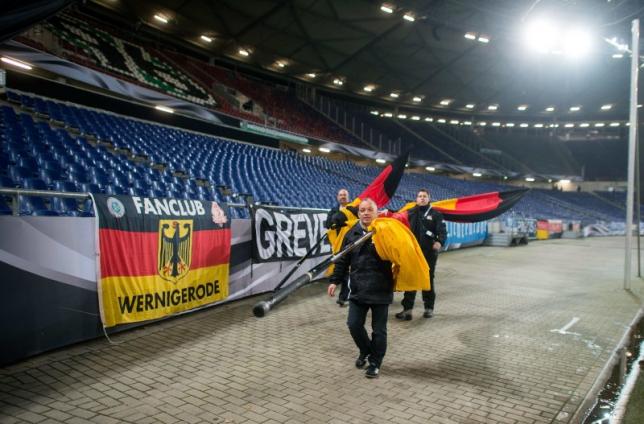 A soccer ( football)  game between Germany and Netherlands which German Chancellor Angel Merkel was due to attend in Hanover was called off two hours before its scheduled start on Tuesday over fears of a planned bombing.

The match was due to have been held four days after deadly attacks in Paris on Friday, when suicide bombers targeted the soccer stadium where Germany were playing France.

“We had received specific indications that an attack with explosives was planned,” Hanover Police President Volker Kluwe told NDR state broadcaster. “We took them seriously and that is why we took the measures.”

Police vans with loudspeakers ordered fans to leave the Hanover stadium and heavily armed officers positioned themselves outside the arena.

Police also evacuated Hanover’s TUI multi-purpose arena where a concert was about to start.

Interior Minister Thomas de Maiziere said the threat was credible and cancelling the game was the right thing to do, but did not provide any details.

“I understand the question but I will not answer it,” he told a hastily convened news conference when asked what had forced the decision. He said divulging details could undermine security at other events.

“We will have such cases in the future, maybe not Hanover but somewhere else,” he said.

Lower Saxony interior minister Boris Pistorius said no explosives had been found and no arrests had been made.

After the attacks in Paris on Friday security measures in Hanover had been tight. In a show of solidarity, Merkel was set to attend with Vice Chancellor Sigmar Gabriel and several government ministers.

“We were re-routed on our way to the stadium and are now in a safe area,” German team spokesman Jens Grittner said on Twitter. “We cannot say more at this moment.”

Interim German Football Association President Reinhard Rauballl said he called up the team in the bus some five kilometers (3 miles) from the stadium, telling them the game was canceled.

Both the German and the Dutch teams were then rushed to a secure undisclosed location before the hosts left individually for their homes and the visitors for the airport.

Two Dutch government ministers who were due to attend the match – Defense Minister Jeanine Hennes and Health and Sport Minister Edith Schippers — were also returning home.

World champions Germany had not initially wanted the game to go ahead after having played in Paris on Friday as a wave of attacks hit the city, killing 129 people.

The contingent of 80 Germans, including players, coaches and staff, then spent the night holed up in the changing rooms of the Stade de France stadium, before heading for the airport on Saturday morning.

But the players, coaches and the national football association then decided to go ahead with the Hanover game in a gesture of solidarity with France.