Worried Lebanese bankers were assured by Geagea over financial laws 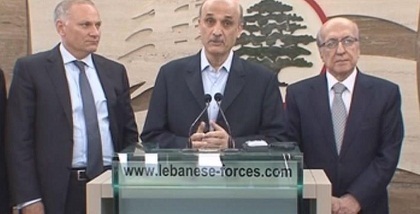 Lebanese Forces leader Samir Geagea  said after a meeting in Maarab with a delegation from the Association of Banks in Lebanon (ABL) that the banking sector “has always been a main staple of Lebanon’s economy, especially in recent years.”

“I briefed them on our real stance on the importance of the financial laws that are of concern to them … We support these laws and I promised them that we will pass them within the deadlines later this year,” Geagea said.

ABL chief Joseph Tarabay meanwhile said the Maarab visit was part of a series of meetings that the association intends to hold with political leaders.

He noted that Geagea gave the delegation “enough reassurances that the financial laws that the international community is demanding will be approved before the end of the year.”

Geagea  warned Tuesday against “manipulating” the Taef Accord, the country’s post-civil war constitution, amid controversy over the constitutionality of a legislative session that is poised to be held amid an expected boycott by the main Christian blocs.

Urging Speaker Nabih Berri to “take into consideration all the proposed bills so that we can decide on them in the Nov. 12-13 legislative session,” Geagea warned that “the issue of respecting the National Pact of coexistence is very critical, and any manipulation of this pact implies a manipulation of the Taef Accord.”

“This should not happen under the excuse that we don’t have an alternative at the moment,” Geagea cautioned, hoping that the Future  movement and its leader former PM Saad Hariri will play “a key conciliatory role” in this regard.

The 1943 National Pact is an unwritten agreement that set the basis for the political system in Lebanon, which is based on a sectarian distribution of power.

The ideas of the National Pact provided the basis of the Taef Accord that stipulated, among other things, equal power-sharing between Christians and Muslims.

The legislative session is scheduled for November 12 and 13 amid a boycott of the Kataeb Party over the ongoing presidential vacuum.

The Lebanese Forces and the Free Patriotic Movement are unlikely to attend either over the failure to include the parliamentary electoral law in  the session’s agenda.

Financial issues will dominate the agenda on Thursday and Friday as the country risks cancellation of World Bank loans and must vote on legislation to help protect its relationship with banks worldwide.

Lebanon’s main political blocs had previously been unable to agree an agenda for a legislative session, obstructing efforts to convene the chamber.

Finance Minister Ali Hassan Khalil said on Thursday that  the “required number of MPs will participate in the session,” saying that 38 items were up for discussion.

“The most important of the items which will be agreed on (include) those related to approval of agreements on World Bank loans,” he said.

“Draft laws which aim to keep Lebanon away from financial and banking penalties” over issues such as money laundering and trans-border cash movements would also be high on the agenda, he said.

World Bank loans planned for Lebanon, which is struggling to cope with more than a million refugees from Syria’s conflict, will be cancelled unless approved by parliament before the end of the year, risking more pain for an economy already hit by the deadlock.

Lebanon’s central bank governor on Tuesday said it was essential the parliament meet to pass laws for development loans, debt issuance and banks, urging politicians to break the impasse harming the economy.

One of the rare occasions parliament met was a year ago, when it extended its own term until 2017, after legislative elections were postponed for a second time.

Parliament has failed to elect a new head of state in the absence of consensus on who should fill the position that fell vacant when Michel Suleiman’s term expired 17 months ago. Berri has called 30 sessions to elect a new president.