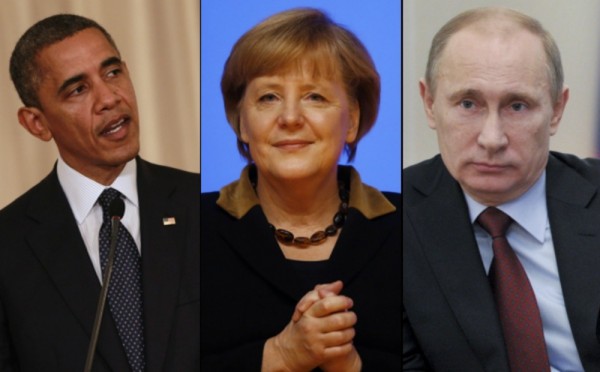 Barack Obama on Wednesday became the first sitting US president to slide out of the top two power rankings as published by Forbes, beaten not just by Vladimir Putin but also Angela Merkel.

“As Obama enters the final year of his presidency, it’s clear his influence is shrinking, and it’s a bigger struggle than ever to get things done,” Forbes wrote.

“At home, his approval ratings are perpetually stuck under 50 percent; abroad, he’s outshined by Merkel in Europe, and outmaneuvered by Putin in the Middle East.”

In August, Putin’s domestic approval rating soared to 87 percent, the highest level in six years, according to an independent polling center.

His intervention in Syria has seen Putin seek to muscle his way back to global influence after months of Western isolation over Ukraine.

“Putin continues to prove he’s one of the few men in the world powerful enough to do what he wants – and get away with it,” said Forbes.

Despite international sanctions imposed after Moscow annexed Crimea and over the conflict in Ukraine, Putin has made the US and NATO look weak, and helped rebuild Russian influence abroad, Forbes said.

“Merkel is the backbone of the 28-member European Union, and her decisive actions dealing with the Syrian refugee problem and the Greek credit crisis helped bump her up the list,” Forbes said.

Among the eight newcomers were Saudi Arabia’s new monarch, King Salman, number 14, and US presidential candidates Hillary Clinton and Donald Trump at number 58 and 72 respectively.

Thirty on the list come from the United States, eight come from China, and four each from Japan and Russia.

Nine women made the cut.

The youngest on the list are 31-year-old Facebook CEO Mark Zuckerberg, at number 19, and North Korea’s 32-year-old leader Kim Jong-un at number 46.