Lebanese and Syrian rescued by helicopters off Cyprus 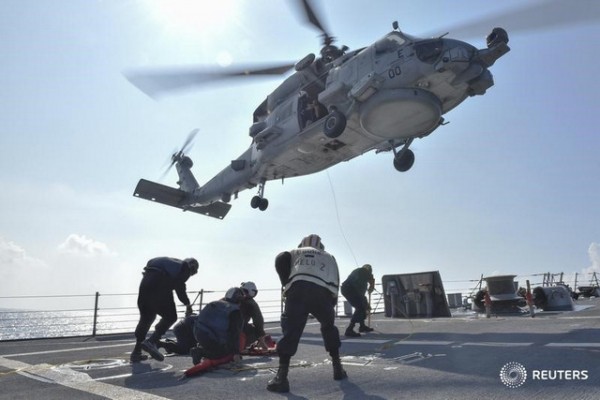 Twenty-six people thought to be Lebanese and Syrian were winched to safety by helicopters off Cyprus in an overnight operation when their sailboat began to sink in rough seas, authorities said.

Radars picked up a distress signal from the boat sailing off the island’s south-eastern tip, which is prone to very strong sea currents. Police said a number of passengers required medical treatment for hypothermia.

“The occupants of the sailboat said they had set off from Lebanon,” a police spokesman said.

The youngest was just five months old and several were kept in hospital for treatment, including a young child suffering from hypothermia and dehydration.

Three of those rescued were arrested on suspicion of people trafficking after others on the boat claimed they had paid for their passage from Lebanon to Greece — 2,000 euros a person for adults and 1,000 euros for children.

State radio said two of those arrested were Syrian and one Lebanese.

It said most of those rescued are originally from Tartus, a government-controlled province on the Mediterranean coast that is one of the safer areas of Syria. Tartus also is where the Russian Naval base is located.

Media reports suggested they were attempting to reach Greece, the primary gateway to the European Union for close to 600,000 migrants and refugees fleeing war this year.

Cyprus is the closest EU member state to the Middle East, but has seen none of the mass influx of arrivals of its EU border counterparts, with most arriving on the island by accident.

The island is not a member of the border-free Schengen area and grants asylum requests very sparingly, according to non-governmental organizations.

About 115 migrants from Syria arrived on a British base in southern Cyprus in mid-October, but Britain has been at pains to emphasize that the territory is not a ‘back door’ way into the UK. Migrants protested against their living conditions at the base on Sunday, media reports said.