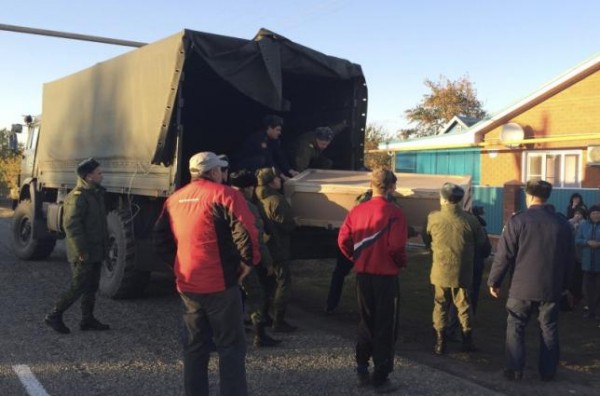 Russian servicemen unload a coffin containing the body of Vadim Kostenko, one of the Russian air force’s support staff in Syria, from a truck near his family’s house in the village of Grechnaya Balka, north-west of Krasnodar, Russia, October 27, 2015. REUTERS/Maria Tsvetkova
Share:

The body of the first Russian soldier to die in Syria was returned to his parents with wounds inconsistent with the official version that he hanged himself, the serviceman’s uncle told a Russian newspaper on Wednesday.

“What is this stuff about him hanging himself?,” an unnamed man who described himself as the uncle of Vadim Kostenko told the Novaya Gazeta newspaper on the day of the dead serviceman’s funeral in his home village in southern Russia.

“He had a broken jaw and the back of his head was bashed in. And his neck was broken.” He also said his nephew’s nose was broken, the newspaper reported.

Kostenko, 19, one of the Russian air force’s support staff in Syria, on Tuesday became the first Russian serviceman to be confirmed dead in four weeks of air strikes there. The ministry of defense said he hanged himself because of problems in his personal life.

Vadim’s parents, Alexander and Svetlana, told Reuters on Tuesday they did not believe Vadim had killed himself, saying their son had sounded cheerful over the phone as recently as Saturday, the day he died while working at an air base on the Syrian coast.

Tatiana, a neighbor who declined to give her surname, told a Reuters reporter on Wednesday that the parents still believed Vadim had not committed suicide.

Novaya Gazeta reported that the parents had demanded a repeat autopsy. The defense ministry was not immediately available to comment, but local media cited it as saying it did not know anything about such a request.

The office of Russia’s main military prosecutor said on Wednesday it was still looking into Kostenko’s death, but said its initial findings confirmed he had hanged himself.

His funeral, which a Reuters reporter witnessed, saw the dead soldier’s family ferry his body to the local cemetery in a small van after his coffin had been carried out of the family home by four soldiers.

Two defense ministry sources told Reuters his body had been found by his fellow soldiers and that it was obvious he had ended his own life. They said conditions at the Syrian base were comfortable and that Vadim’s phone had 10 unreturned calls on it, which they said were probably to his girlfriend.

The dead soldier’s casket was left partially open on Wednesday before his burial. A Reuters reporter was able to observe a bruise on the bridge of his nose. A soldier carrying the blue, white and red Russian flag walked behind the coffin before it was loaded onto the van.

His mother, sobbing and wearing a black head scarf, walked with difficulty. She referred to her dead son as her “little one” before climbing into the van and stroking his face on the journey to the graveyard.

Neighbors said a local priest had visited the family home on Wednesday morning, but had refused to carry out a blessing because of the circumstances.

Soldiers fired three shots into the air before the casket was closed. The soldier was buried wearing his dark blue air force uniform. The collar was turned up, covering his neck.