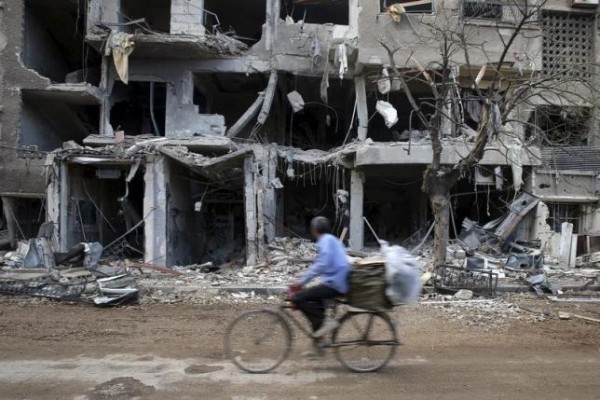 A man rides a bicycle near damaged buildings in Jobar, a suburb of Damascus, Syria October 27, 2015. REUTERS/Bassam Khabieh
Share:
A senior member of Syria’s Western-backed political opposition came out on Wednesday against Iranian participation in Syrian peace talks in Vienna, saying their presence would undermine the political process.

The United States has said that Iran, the main regional ally of President Bashar al-Assad, would be invited to Friday’s talks and the semi-official Iranian news agency ISNA said Iranian Foreign Minister Mohammad Javad Zarif and his deputies would attend.

About a dozen participants are expected including Russia and Saudi Arabia, which back Assad and his opponents, respectively.

Hisham Marwa, Vice-President of the Turkey-based Syrian National Coalition, criticized any participation in the talks by Tehran but stopped short of saying it would refuse participation itself if Iran was involved.

“Iran doesn’t believe in the Geneva Communiqué. Involving it (Iran) in talks undermines the political process,” he told Reuters, speaking of an internationally agreed document setting out guidelines for Syria’s path to peace and a political transition.

Asked whether the Coalition would refuse to take part in talks, he said, “What’s important now is not to refuse talks, it is important to express our concern. Iran has only one project – to keep Assad in power… they don’t believe in the principle of the talks”.

In January 2014 the opposition body refused to attend political talks in Switzerland unless the United Nations retracted its invitation to Iran.

The Turkey-based Coalition has little influence over rebels fighting to overthrow Assad in a conflict that has been complicated by the successes of rival hardline Islamist groups, many of whom have their own political networks.

Its critics say the exiled group fails to represent the Syrian people and its decisions are dictated by its two main backers – Saudi Arabia and Qatar – which compete for influence.

Russia intervened militarily in Syria’s civil war at the end of last month in support of Assad, and the Syrian army is also supported by Iranian fighters.

Russia and Iran say Assad must be part of any transition and that the Syrian people will decide who governs them. The United States has said it could tolerate Assad during a short transition period, but that he would then have to exit the political stage.