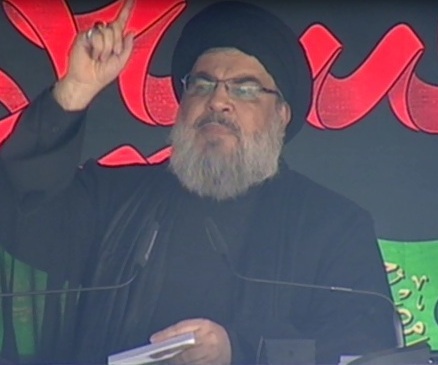 In a televised appearance marking the end of the annual Ashura mourning Hezbollah leader Hassan Nasrallah attacked the Saudi leaders and his supporters chanted “Death to the Saud family” in a sign of deepening hostility towards the U.S.-allied kingdom.

Hezbollah is a key player in the struggle playing out across the Middle East between the conservative Sunni Muslim-led government of Saudi Arabia and the Shi’ite Islamist government of Iran.

Thousands of its fighters are in Syria to support President Bashar al-Assad, taking part in a new ground offensive also backed by Iranian forces and Russian air strikes against insurgents who have received Gulf Arab backing.

The Saudi-Iranian rivalry is also playing out in Yemen, where Riyadh is leading a military intervention to try to restore President Abd-Rabbu Mansour Hadi’s government and fend off what it sees as creeping Iranian influence.

On the war in Syria, Nasrallah predicted victory for Assad and his allies. “Syria will not fall,” he proclaimed .

Tens of thousands of Hezbollah supporters marched through the Shi’ite southern suburbs of Beirut. Some beat their chests in a show of self-punishment over the failure of Muslims to help Hussein in battle against the Islamic ruler at the time, Yazid.

Lebanon has also been an arena for Saudi-Iranian rivalry between Hezbollah and its Christian and Shi’ite allies on the one hand, and a rival alliance led by Sunni politician Saad al-Hariri, who is backed by Riyadh, on the other.

“Don’t wait for Iranian-Saudi dialogue. Matters in the region are getting more complicated,” he said. “Don’t await an American or Western initiative. Lebanon is beyond the concerns of foreign states. Lebanon is today left to its leaders.”

“They have waited for Syria to fall, but it did not and it will not. They shall not benefit from this opportunity. In Lebanon we are the masters of our decisions.” He said .

He urged his rivals to pursue the ongoing dialogue seriously because there is no substitute.

But Interior Minister Nouhad Mashnouk , a key member of the Hariri-led Future Movement said Friday he is still undecided on whether to attend a new round of talks with Hezbollah following unprecedented political escalation between the Future Movement and Hezbollah that threatened to unravel their nearly year-old dialogue.

Lebanon has been without president for over a year.

As in the past sessions the parliament was unable to reach a quorum because the Iranian backed Hezbollah militant group and its ally MP Michel Aoun’s Change and Reform bloc MPs boycotted the session.

Speaker Nabih Berri a key ally of Hezbollah postponed the election to November 11, 2015

Iran has been blamed for the impasse and for this reason the Lebanese were expecting that as soon as Iranian nuclear deal is finalized an agreement could be worked out between Iran and Saudi Arabia to end the presidential crisis.

Following the failed session, former PM and head of the Future Movement bloc MP Fouad Siniora warned that the “failure to elect a president is leading Lebanon towards further disintegration.

“Those obstructing the elections are responsible for the current state of affairs in Lebanon,” Siniora declared from parliament.

“Electing a head of state is key to reaching a solution to major problems in Lebanon,” he stressed.

“The polls should not be linked to regional affairs and we need to elect a president who not only represents his community, but all the other Lebanese communities,” added the MP.

“We shall continue our struggle to confront the American projects. Just like we defeated Israel, the takfiris and their American masters will be defeated as well.” He added.