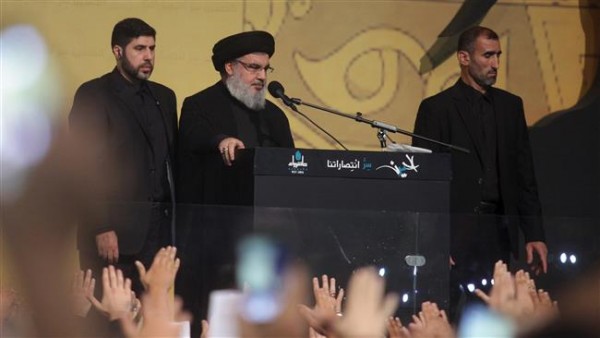 In a rare public appearance in Beirut to mark the Shi’ite Ashura mourning ceremonies , Hezbollah secretary-general Hassan Nasrallah accused the United States of seeking to impose its hegemony on the region and told the Iraqis not pin their hopes on the US to end the terror threats they are grappling with.

“We look forward to the victory of the Iraqi people against Daesh. We urge them not to pin their hopes on the US or the West. You have enough courage to defeat them all,” Nasrallah said during his speech at al-Shohada Complex in southern Beirut on Saturday.

Daesh is the Arabic name for the Islamic State

Nasrallah said that Israel was “a tool of the West” that was acting as a “subcontractor for US hegemony in the Middle East.”

“Israel is a tool that is being used by the West to take control of the Middle East region,” the Hezbollah leader said adding “That’s why the West defends it.”

“The Palestinian people, and all the other nations in the region, chief among them the Lebanese, who have suffered from the Israeli occupation and massacres – they are the ones that bear the burden of the American project of domination [of the Middle East],” Nasrallah said. “The US is responsible for the crimes being committed in Palestine.”

The Hezbollah chief said the US “inherited the old colonialist behavior whose goal is to control the Middle East politically, socially, militarily, and culturally.”

Nasrallah accused the Americans of wishing to “bring every Muslim under its control so that eventually the nations of the region will recognize Israel.”

“We will not back down in this battle if anyone is betting on this. This is a battle that we believe in and we will win it,” Nasrallah said in reference to Hezbollah’s role in defending the Syrian regime.

He noted that “the rival front in Syria is not led by (al-Nusra Front chief Abu Mohamed) al-Golani, (al-Qaida chief Ayman) al-Zawahiri or (Islamic State chief Abu Bakr) al-Baghdadi, but rather by the United States.”

“The ongoing war is not for the sake of reforms, democracy, human rights, poverty or countering ignorance but it is rather aimed at subjugating those who rejected the U.S. scheme and punishing those who defeated the New Middle East scheme in 2006,” added Nasrallah, referring to the 2006 war between his group and Israel.

“The resistance in Lebanon, (President Bashar) Assad’s Syria, Palestine and Iran toppled the New Middle East scheme and the U.S. wants them to pay the price. This is how we should interpret the current battle,” Nasrallah added.

He noted that all jihadists and rebels fighting to topple Assad are “serving the U.S. interests.”

“All of America’s talk about human rights and democracy is meaningless because the biggest dictatorships in the region are sponsored by the U.S.,” Nasrallah said, referring to Arab countries.

“The governments in the region are nothing but local administrations headed by a king or a president, because the decisions of war, peace, foreign policy and markets are in the hands of the U.S.,” he lamented.

“The U.S. wants us to accept Israel under the threat of waging all kinds of wars against us,” said Nasrallah.

He pointed out that Israel will “lose its ability to survive in our region” if “America weakens,” noting that the Palestinian people are “suffering the burden of the U.S. hegemony over our region.”

“The U.S. and the successive American administrations are to blame for all of Israel’s actions, even more than (Israeli Prime Minister Benjamin) Netanyahu and Netanyahu’s terrorist army,” Nasrallah added.

Hezbollah has sent elite forces across the border with Syria to bolster Assad’s regime in the face of an Islamist-led uprising.

Russia and Iran are also providing instrumental military support for the Syrian government.

Earlier this month, Hezbollah lost a senior commander in Syria, the highest-profile battle death for the group since the Iranian backed Shiite party joined the war next door, fighting on the side of Assad.

This year, the movement has used the emotionally-charged Ashura, which commemorates the death in battle of the Prophet Mohammed’s grandson Hussein, to rally support for its involvement in Syria, where intensified fighting has seen it and Shi’ite backer Iran pay in blood.

Hezbollah fighters are playing a central role in an offensive launched by the Syrian army and its militia allies, taking advantage of air support from Russia which began strikes on the government’s foes three weeks ago.

With no end in sight to the conflict that has killed over quarter of a million people, maintaining morale is as important as ever.

Projected live onto a big screen in the hangar in Hezbollah’s Beirut stronghold Dahiyeh, Nasrallah thundered against Saudi Arabia, one of the Sunni Muslim states that back the insurgency against Assad.

He described the anti-Assad insurgents as part of a “terrorist project” and Hezbollah’s fighters as “men of the resistance” who must fight harder than ever at a critical stage in the battle.

Some of Hezbollah’s Lebanese opponents say its role in Syria has had the opposite effect, fueling Sunni militancy in Lebanon, which is still recovering from its own 1975-1990 sectarian civil war.

Ashura marks the death of the Prophet Mohammad’s grandson Hussein in a lost battle 1,300 years ago, an event central to the split between Sunni and Shi’ite Islam and marked by Shi’ites around the world with weeping and prayer.

The Islamic State proclaims Shi’ites heretics who must repent or die.

“It’s becoming each year more and more an occasion to send messages, to mobilize,” International Crisis Group expert Sahar Atrache said of Hezbollah’s observance of Ashura. “Now the rationale is… it’s either Assad or the Islamic State. For them it’s really an existential war.”
YL with Reuters