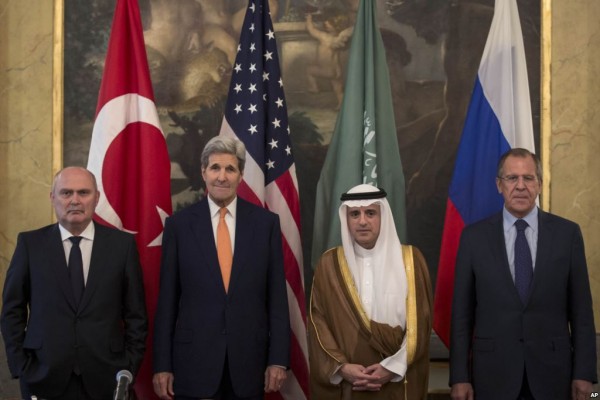 (From left to right) Turkey’s Feridun Sinirlioglu, John Kerry of the US, Saudi Arabia’s Adel al-Jubeir and Russia’s Sergei Lavrov met for the talks in Vienna on October 23, 2015. AFP
Share:
The United States, Russia, Saudi Arabia and Turkey put forward new ideas Friday to revive a failed push for a political transition in Syria that could end the country’s civil war, U.S. Secretary of State John Kerry said Friday.

But they remained deeply divided over the future of Syrian President Bashar Assad.

The top diplomats from the four countries agreed to meet again in an expanded format with representatives from other nations next week, but the only concrete result of this week’s talks appeared to be an agreement between Jordan and Russia to coordinate military operations in Syria. Kerry said there was no decision on whether to invite Iran, a major patron of Syria.

“I am convinced, having been part of this process since the day I became secretary that today’s meeting was constructive and productive and succeeded in surfacing some ideas, which I am not going to share today, but which I hope have a possibility of changing the dynamic,” Kerry told reporters after the meeting.

Lavrov said he has invited the U.S., Saudi Arabia and Turkey to join the coordination center that Russia and Jordan agreed earlier Friday that they would set up to integrate their air campaigns over Syria. Jordan is a member of the U.S.-led coalition that is bombing Islamic State facilities in Iraq and Syria. The coalition has so far refused to cooperate with Russia’s operations beyond a basic agreement intended to prevent mid-air incidents. Mohammad al-Momani, Jordanian government spokesman said the agreement did not mean that Jordan was leaving the coalition.

Kerry, traveling to Jordan later Friday for talks with King Abdullah II and Palestinian leader Mahmoud Abbas, said the new ideas “are in keeping with all of the principles that have been laid down and with sensitivities of the nations and the parties, the opposition, all those involved in this effort.”

“We will not accept the presence of Assad for one day in the transitional period,” said Anas al-Abdah, a member of the coalition, said in a statement emailed to AP.

Kerry said the countries’ representatives would meet again as early as next Friday to determine whether there is enough reason to proceed.

The U.S., Turkey and Saudi Arabia all share the view that Syrian President Bashar Assad must go if the conflict is to be resolved. Russia, however, is Assad’s prime backer, along with Iran. Russia began airstrikes in Syria last month that it said were aimed at Islamic State militants, but the U.S. and its allies say the bombing is bolstering Assad rather than targeting militants.

Kerry said that despite Russian and Iranian support for Assad, the U.S. and allied nations “understand that Assad creates an impossible dynamic for peace.” That situation, Kerry said, “has to be resolved,” suggesting political talks could patch up the differences.

Lavrov said Russia’s support for Assad remains strong despite what he described as “rumors” that the current talks were aimed at eventually easing the Syrian president from power.

“Our partners have some obsession with the figure of the Syrian president, but we reaffirmed our position,” Lavrov said. He pointed to Russian President Vladimir Putin’s warning during recent talks with Assad in Moscow that a narrow focus “on a concrete figure” during the height of the continuing conflict could lead to a “grave crisis.”

Should talks include Iran?

One item on the agenda, Kerry said, was which nations should be included political transition discussions. Russia is keen to bring Iran into the talks, but Saudi Arabia is opposed. The Obama administration has said repeatedly that all the countries with an interest in Syria, including Iran and Russia, need to agree on what the transition should bring: a unified, secular and pluralistic Syria governed with the consent of its people. Assad, the administration, says is the only thing standing in the way.

Syria is in its fifth year of a civil war that has killed hundreds of thousands, spurred a massive refugee crisis in Europe and led to the emergence of the Islamic State group and Russia’s direct military intervention.

Friday’s meetings in Vienna – site of the world’s last major international diplomatic success, the Iran nuclear deal in July – followed a surprise visit by Assad on Tuesday to Moscow. There, he and Putin discussed Russia’s military operations in Syria that the U.S. and others say are bolstering Assad and not targeting Islamic State militants, as Russia claims.

Putin said Thursday that Assad had told him he is ready to talk with his political foes. Putin also defended Russia’s bombing campaign, saying it would set the stage for peace talks.

A military victory over the militants “will not solve all problems, but it will create conditions for the main thing: a beginning of a political process to encompass all healthy, patriotic forces of the Syrian society,” Putin said. His words echoed those of Syrian government officials who have expressed readiness to negotiate with the “patriotic” opposition – a term generally used to describe unarmed, mostly Damascus-based government critics who are tolerated by Assad.