Jewish Israeli man shot dead after being mistaken for attacker 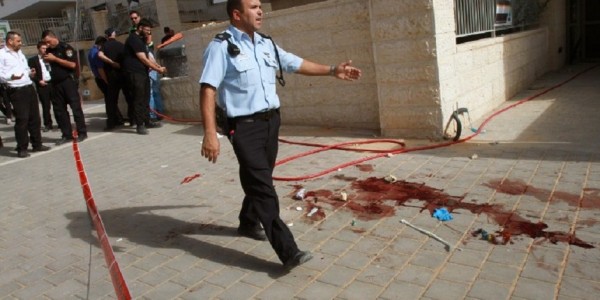 An Israeli police inspecting the site where two alleged Palestinian attackers were shot by Israeli police after attempting to board a bus carrying children then stabbing an Israeli, in the Israeli city of Beit Shemesh, west of Jerusalem. — AFP pic
Share:
A Jewish Israeli man was shot and killed in a scuffle with Israeli soldiers who suspected he was a Palestinian attacker, police said Thursday, in a reflection of the jittery mood that has gripped Israelis amid a spate of near-daily stabbings.

The shooting came as Prime Minister Benjamin Netanyahu was in Germany for talks with U.S. Secretary of State John Kerry on how to restore calm. Kerry expressed a “cautious measure of optimism” following the four-hour meeting about proposals that could help defuse tensions. Kerry is set to meet with the Palestinians this weekend.

Police spokesman Micky Rosenfeld said the shooting of the Israeli man in Jerusalem late Wednesday occurred after soldiers patrolling the area asked him to show ID as he got off a bus.

The man refused, scuffled with the soldiers and then attempted to seize one of their weapons. A private security guard nearby shot the man, and one soldier also opened fire, police said. The man later died of his wounds.

Police said the soldiers had grown suspicious when the man, speaking in Hebrew, asked to see their IDs and proclaimed, “I am ISIS,” referring to the Islamic State militant group.

“The soldiers had high suspicions that he was a terrorist,” Rosenfeld said. Police later identified the man as a 28-year-old Jewish resident of Jerusalem, without providing further details.

Avraham Ben Haim told Channel 10 TV he was a friend of the man killed. He said the man was from the restive Russian region of Dagestan, worked as a security guard and was not stable.

Grainy footage emerged Thursday showing the man scuffling with numerous people on the street before he was shot.

Palestinian attacks have Israelis on edge. Several politicians have urged licensed gun owners to carry their weapons and there have been several bloody accidents. In one case, an Israeli man stabbed a fellow Jew, thinking his victim was an Arab because of his dark skin. Earlier this week, a security guard shot an Eritrean migrant he thought was an attacker during a bus station shooting.

As the Eritrean lay on the ground, a mob cursed, kicked and hit him with objects. He died of his wounds. Four suspects arrested for their role in the beating were released on bail following a court appearance.

Opposition legislator Tzipi Livni accused hard-line politicians of fomenting a climate of fear and danger with their calls for people to arm themselves.

“This is not the Wild West,” she told Israeli Army Radio. “The suspicion there is now, the fear and the hate lead to brutal and very difficult results.”

Israelis have scrambled to purchase pepper spray for self-defense, and stores and restaurants are empty. Israel has beefed up security, deploying hundreds of soldiers to back up thousands of police officers. Police have erected concrete barriers and checkpoints at the entrances to Arab areas of east Jerusalem, where many of the attackers are from.

Meanwhile, many Palestinian residents of Jerusalem have been afraid to leave their homes for fear of getting mixed up with vigilante mobs or being mistaken for an attacker.

In new violence Thursday, police said two Palestinians stabbed an Israeli at a bus stop after they tried to board a bus ferrying children to school. Police shot the two men, one of whom later died while the other was seriously wounded. Police said the Israeli man was moderately wounded.

Israel’s Shin Bet internal security agency said the men, both about 20 years old, have records of militant activity. One is a member of the Islamic militant Hamas group while the other was jailed for two years after he was caught carrying a knife at a sensitive West Bank holy site.

Later Thursday, New Zealand’s foreign minister said his country will circulate a draft U.N. resolution in the coming days that will call on Israeli and Palestinian leaders to use their authority to end the current wave of violence.

Murray McCully told a U.N. Security Council ministerial meeting that the draft will also reaffirm the council’s commitment to a two-state solution and direct talks to achieve peace.

He said the council should mandate a course of action for the two parties to prepare for talks in “a realistic but early timeframe.”

Israeli and Palestinian officials at the U.N. traded blame for the violence.

Israel’s U.N. ambassador Danny Danon told the Security Council to “stop making excuses for the Palestinians” and hold them accountable for the current wave of violence. He said the U.N. should end its usual practice of urging both sides to exercise restraint and demand that Palestinian President Mahmoud Abbas “cease his incitement.”

Also Thursday, Israeli troops placed a concrete barrier in the West Bank city of Bethlehem, near a Jewish holy site where thousands of faithful are expected for a pilgrimage this weekend. The gathering threatens to heighten tensions in the city, where Palestinian demonstrators clashed recently with Israeli troops.

Police said they would deploy hundreds of troops to maintain calm. The holy site known as Rachel’s Tomb lies beyond Israel’s West Bank separation barrier on the outskirts of Bethlehem.

Ten Israelis have been killed over the last month, mainly in stabbing attacks. On the Palestinian side, 48 people have been killed, 27 of them labeled by Israel as attackers, the others killed in clashes with Israeli forces.

The violence erupted a month ago, fueled by rumors that Israel was plotting to take over a sensitive Jerusalem holy site revered by both Jews and Muslims.

Palestinians point to the growing number of Jewish visitors to the site, as well as calls from activist groups and senior politicians for expanded prayer rights.

Israel says it is committed to a longstanding status quo and adamantly denies the rumors, saying they incite violence.

The violence was initially confined to Arab areas of east Jerusalem but soon spread deep into Israel, the West Bank and the Gaza Strip.

The Palestinians say the violence is rooted in frustration at decades of living under Israeli occupation, while Israel accuses Palestinian leaders of inciting the unrest.

U.N. Secretary-General Ban Ki-moon met with Israeli and Palestinian leaders during a visit to the region this week and then offered the Security Council a grim assessment of prospects for defusing the violence.

Netanyahu, who met with German Chancellor Angela Merkel on Wednesday, held talks with Kerry on Thursday in Germany.

After the meeting, Kerry said he would “characterize that conversation as one that gave me a cautious measure of optimism.” He said he hoped there would be some proposals in the next few days.

Kerry told reporters that he planned to raise the proposals with Palestinian President Mahmoud Abbas and Jordan’s King Abdullah this weekend in Jordan’s capital, Amman.

Before their talks, both Kerry and Netanyahu condemned the wave of Palestinian attacks on Israelis. The Quartet of Mideast mediators, a grouping that includes the U.S., U.N., EU and Russia, is set to meet Friday to call for calm.