The impact of the Jerusalem Intifada on the Israeli economy 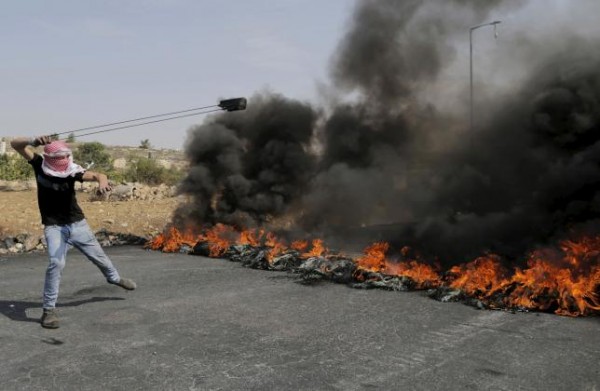 A Palestinian protester uses a sling to hurl stones towards Israeli troops during clashes near the Jewish settlement of Bet El, near the West Bank city of Ramallah October 20, 2015. REUTERS/Ammar Awad
Share:
Israel is currently in a state of chaos and confusion due to the dangerous decline in the security situation. The Palestinians’ operations and popular anger and protest in occupied Jerusalem, the West Bank and the Gaza Strip, as well as the Palestinian territories occupied in 1948 (Israel), are clearly having an effect. The Israeli economy has not been spared from the latest Palestinian response to Israel’s brutal military occupation. Indeed, the “Jerusalem Intifada” has had, and is likely to have, a major impact on the Israeli economy — including public and private facilities — as have its predecessors. Palestinian popular uprisings have had tangible negative effects on Israeli institutions, facilities, services, as well as their profits, completely or partially paralysing some. This has led ultimately to the gradual deterioration of the Israeli economy, slowly pushing it into a recession.

Israeli economic reports have revealed the extent of the damage in the event that the Jerusalem Intifada continues at the same pace for just two months. According to Makor Rishonnewspaper, just one month of the intifada would cost Israel about $1.3 million in national income, mostly in lost tourism revenue. It has already suffered in Jerusalem, with a 50 per cent in hotel reservations for October. A two-month uprising, with stabbings, hit-and-run attacks and shootings, would cost Israel around $2.7 million in direct and indirect losses. This will pose a serious threat to the overall economy, with the potential to push it into recession. In addition, the publication explained that an extra $1.1 million has been allocated to cover additional army and policing costs to cope with the uprising.

Credit card use has declined by 11 per cent since the beginning of this month. This is attributed to the fact that many Israelis are staying at home or buying from local shops and paying cash.

Economic expert Ayelet Nir believes that the lack of security felt by the Israelis has been reflected in the downturn. Although an actual war was fought in the summer of 2014, rather than a popular uprising, greater losses have been sustained by the Israeli market over the past two weeks than during the Gaza offensive.

Professor Avi Ben-Bassat, the former Director General at the Ministry of Finance, warned that Israel is facing serious economic damage. This intifada and consequent operations, he explained, have come at a time when the Israeli economy is suffering from slow growth and investments are suffering a sharp decline.

The repercussions and impact of the Jerusalem Intifada can be classified as direct and indirect. The former includes the disruption of production as well as domestic and foreign tourism. The number of tourists coming to Israel has dropped; hotel reservations are down and small businesses catering for tourists face closure.

In addition, the performance of the stock market has been hit, and the service economy has been disrupted, such as public transport and the carriage of goods around the country. An additional 300 police officers have been recruited to protect buses, with the extra costs that this incurs. In fact, the economy is impacted directly by the extra costs to the government for policing the overall uprising and the call-up of army reservists. Many businesses have closed down, especially in Jerusalem, which has an effect on Israel’s GDP.

The negative impact of the intifada is not limited to the economy. It has also hit the education sector, especially religious education in Jerusalem. Dozens of schools have been shut down, with students absent from classes; some towns have reduced the number of hours in the school day, and school buses are being escorted.

Indirectly, the effects of the intifada have led to those in economic circles saying that trust and satisfaction amongst foreign investors will fall. The lack of a stable economic environment will persuade investors to look elsewhere due to the absence of security in the occupied territories.

No one denies that the Israeli economy is booming in comparison to the economies of surrounding countries and developed capitalist countries; it is, after all, achieving 5 per cent annual growth. However, Israel’s is a daily, instantaneous economy that is impacted by events at any given the moment. Such an economy responds immediately to political variables and changes, as well as security incidents, and the variables of time and place. Hence, despite its relatively high growth rate, it may suddenly, not gradually, plummet to very low levels in the event that the intifada continues, and this will have a financial and psychological impact on Israeli citizens.

The Jerusalem Intifada is already having a negative impact on the Israeli economy. The government fears that if it continues, all trust in the ruling coalition will be lost. Although some believe that any losses suffered by Israel as a result of the uprising or any similar events can be compensated by means of more US support — and so the loss of a million here or there is no major problem — we must keep in mind that the confidence in Israel as a safe, democratic oasis is being shaken. It is also hard to quantify the psychological damage. It is a lie to suggest that Israel is the ideal country for investments planning to produce products reaching the largest growing market, which is the Arab world. The effects and impact of the intifada are likely to be devastating for Israel in every sense, not just economically.