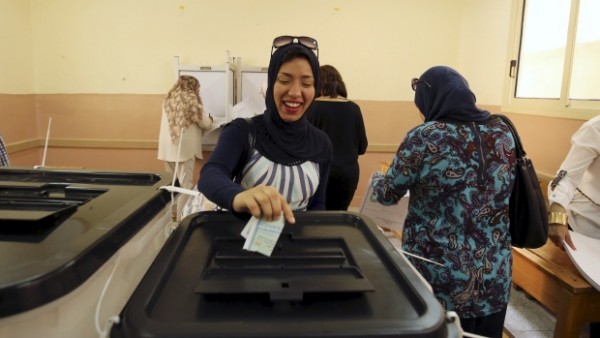 Polling stations visited by Reuters correspondents pointed to a turnout of around 10 per cent, in sharp contrast to the long lines that formed in the 2012 election, suggesting that el-Sissi, who has enjoyed cult-like adulation, is losing popularity.

Elderly supporters of el-Sissi comprised a large proportion of those turning out to vote, while younger Egyptians boycotted an election for a chamber they say will just rubber-stamp the president’s decisions.

​”It’s not going to matter. It’s just for show, to show that we are a democracy, and we have elections, and blah blah blah any nonsense,” said Ahmed Mostafa, 25, who works in a lab.

Ahmed Ibrahim, a 34-year-old accountant, had a similar view.

“The youth in Egypt, our ambition in 2011, we were going to build the country — but then suddenly it was stolen from us,” he said. “Ninety-nine per cent of my friends are not going to vote.”

Egypt has had no parliament since June 2012 when a court dissolved the democratically-elected main chamber, then dominated by the Muslim Brotherhood, reversing a key accomplishment of the 2011 uprising that toppled Hosni Mubarak.

In 2013 el-Sissi, then army chief, overthrew Egypt’s first freely-elected president in 2013, the Brotherhood’s Mohameed Muosi, then launched the fiercest crackdown on dissent in Egypt’s modern history. Human rights groups say Egypt has about 40,000 political prisoners, many of them supporters of Morsi.

“The election is a farce. I don’t think anyone in Egypt is taking it seriously,” Muslim Brotherhood official Wafaa Hefny told Reuters on Sunday.

But many pro-democracy secularists share the sense of disillusionment with the course of events in Egypt, a country of about 90 million where half the population is under 25.

“We are not even actively boycotting. We simply don’t care,” said Mohamed Nabil, a member of the now banned April 6, one of the pro-democracy youth protest movements that helped ignite the uprising that ousted Mubarak.

“The youth took to the street for a dream. We had hopes. We wanted democracy and the chance to build our country.”

Security was tight in a country facing an Islamist militant insurgency, in addition to widespread poverty, high unemployment and an energy crisis.
On paper, the new parliament will have wide ranging powers. It can reject the president’s choice for prime minister or even impeach the president. But with Muslim Brotherhood leaders and youth activists behind bars, critics doubt it can provide checks and balances.

Few analysts expect turnout to exceed a third of the electorate.

El-Sissi secured support from other opposition groups for ousting Morsi by promising a prompt parliamentary vote. The elections, repeatedly postponed, are now taking place over two rounds on Oct 18-19 and Nov 22-23.

This week, voters cast their ballots in 14 regions including Egypt’s second city of Alexandria on the Mediterranean coast.

Critics say an electoral system that puts the emphasis on individuals is a throwback to Mubarak-era politics, which favoured candidates with wealth and connections.

“Being a member of parliament for many is a chance to be close to government. It’s like joining the government club,” said Khaled Dawoud, who recently resigned as spokesman for the Destour Party and Democratic Current electoral alliance.

The unicameral parliament will comprise 568 elected members — 448 elected on an individual basis and 120 through winner-takes-all lists in four districts, with quotas for women, Christians and youth. The president may also appoint a further five per cent. Final results expected in December.

For the Love of Egypt, an alliance of loyalist parties and politicians, is running for all 120 list seats and is expected to do well.

An alliance of socialist opposition parties that had been due to contest eventually pulled out, leaving the field dominated by el-Sissi loyalists.

The Islamist Nour Party, which came second in the last election, will take part. However, it has lost much support among Islamists since endorsing Morsi’s overthrow.

Speculation is already rife that the constitution will be amended to curb parliament’s powers.

“I used to sleep in Tahrir Square [in central Cairo] during the revolution [of 2011 against Mubarak] but nothing has changed,” said Ahmed Bahaa Karmy, 26.