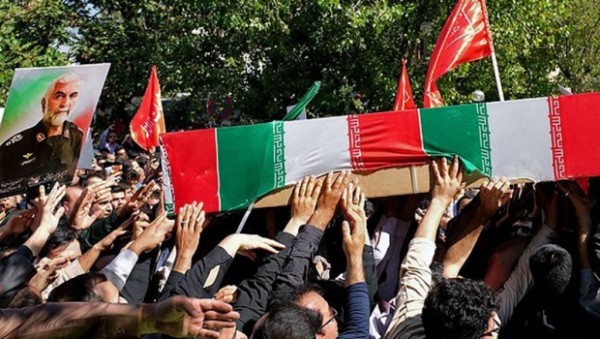 Funeral of Gen. Hossein Hamedani, Sunday October 11, 2015. He was killed in Syria
Share:

Iran held a funeral Sunday for Gen. Hossein Hamedani, a senior Revolutionary Guard commander who was killed by the Islamic State group last week near the Syrian city of Aleppo, according to a state TV report.

Hamedani was a specialist in asymmetrical and irregular warfare, who reportedly led the Guard’s Syria strategy.

He was the second senior Guard commander killed in Syria since the beginning of the year. In January Brig. Gen. Mohammad Ali Allahdadi was killed by an Israeli airstrike.

Iran is one of Syrian President Bashar Assad’s main allies and has provided his government with military and political backing for years. Tehran admits that Revolutionary Guard officers are on the ground in Syria in an advisory role, but denies the presence of any combat troops in the country.