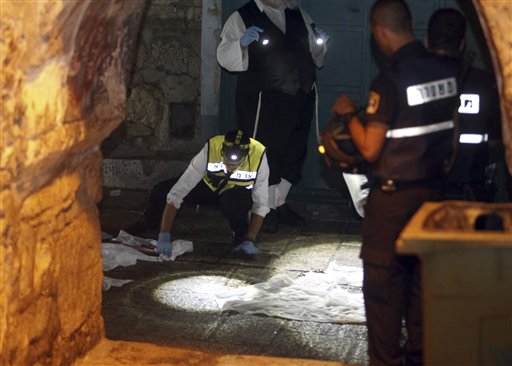 Israeli forensic inspect the scene of an attack in Jerusalem’s Old City, Saturday, Oct. 3, 2015. A Palestinian fatally stabbed two Israelis as they walked in Jerusalem’s Old City and seriously injured a toddler and a woman, before he was shot and killed by an officer on duty, police said Saturday in the latest in a series of Palestinian attacks. (AP Photo/Mahmoud Illean)
Share:

Tensions have soared over access to a sensitive holy site within the Old City that is sacred to Jews and Muslims. Israeli police and Palestinian demonstrators have clashed repeatedly at the hilltop compound in recent weeks, and the unrest has spread to the West Bank, where clashes erupted Sunday during an Israeli arrest raid.

Israeli Prime Minister Benjamin Netanyahu said he would meet with security officials Sunday to decide upon a “harsh offensive on Palestinian Islamic terror,” according to a statement on his Facebook page. “We are in an all-out war against terror,” Netanyahu said in the post.

Relatives of the teen behind Sunday’s attack identified him as Fadi Alloun, 19, from Arab East Jerusalem. Yesterday, he wrote on his Facebook page: “Either martyrdom or victory.”

Israeli police said they are preventing Palestinian residents of east Jerusalem from entering the Old City for two days during a Jewish holiday to prevent violence. Palestinians who live, work and study within the Old City, as well as Israelis and tourists, will be allowed in.

Some 300,000 Palestinians live in Jerusalem, making up about a third of the city’s population. They live in the predominantly Arab eastern district and have residency status in the city, but do not hold Israeli citizenship. They are usually free to enter the Old City in east Jerusalem, where major Muslim, Christian and Jewish holy sites are located.

In the West Bank, Israeli troops shot and wounded at least 18 Palestinians in violence during an arrest raid in the Jenin refugee camp, a Palestinian hospital director said. The refugee camp was the scene of some of the fiercest fighting of the second Palestinian intifada, or uprising, in the early 2000s, but has been mostly calm over the last several years.

Monther Irshaid, director of the Khalil Suliman Hospital in Jenin, said the Palestinians were shot in the legs with live bullets and two suffered serious leg injuries.

The clashes broke out as troops surrounded the home of a Palestinian suspect. Eyewitnesses said Israeli troops fired a “small missile” at the house to force the suspect out. The Israeli military said a few dozen Palestinians attacked troops with pipe bombs and that troops responded with “riot dispersal means.”

Troops arrested two Palestinians suspected of “terror activity.” One armed suspect barricaded himself inside a building and a fire broke out during the arrest, the army said without elaborating. The army said troops found explosive devices inside.