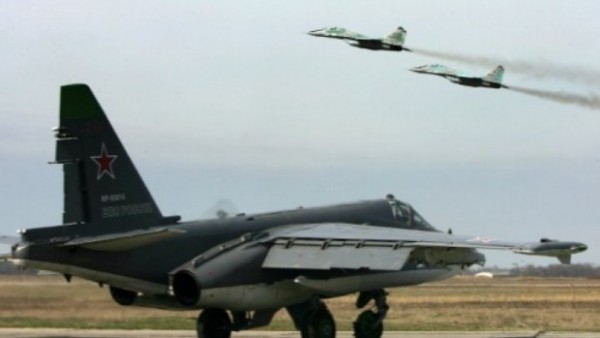 Russia on Wednesday launched its first air strikes in Syria, in what it said was an operation to defeat Islamic State jihadists.

But the West is skeptical and says Moscow is helping out its old ally, Syrian President Bashar al-Assad.

How big is the Russian force in Syria?

The Russians currently have at least 32 warplanes deployed in Syria, US officials say. The fleet comprises four Su-34 bombers, 12 Su-25 bombers, 12 Su-24 attack aircraft and four Su-30 fighter jets. The planes are based at an airfield that Russia has reinforced and turned into a forward operating base in Syria’s Latakia region in the northwest.

Russia has stationed about 500 marine infantry troops at the base, likely to protect the facility. Including pilots, air crews and support workers, about 2,000 personnel are at the base, US officials say.

Is Russia coordinating with the US-led coalition?

US officials say a Russian general working at an intelligence center in Baghdad walked over to the US embassy and gave an hour’s “heads-up” that warplanes were about to launch strikes in Syria.

But the verbal communique had no information about when, where or how the strikes would occur, so was far from what the Pentagon envisions when it talks about “deconfliction” — reducing the risk of coalition and Russian planes crossing paths in the same air space.

Officials note that even if deconfliction talks break down, coalition planes have on-board systems that would alert them to the presence of other planes nearby and take appropriate avoiding measures.

What are Russia’s objectives?

The US administration’s domestic critics, such as hawkish Senator John McCain, say Russia’s main goal is really to “keep the murderous Assad regime in power.”

NATO commander General Philip Breedlove on Monday suggested that Russia had placed SA-15 and SA-22 anti-aircraft missile batteries in Syria. He noted these would be of little use against the IS group, which has no air force.

The missiles could serve as a protective “bubble” over and around Syria, he said, something that could hinder coalition efforts.

How will it change the conflict?

Russian forces have the advantage of being able to coordinate with Assad as they plan strikes and share intelligence with the regime.

Military experts point out the limits of bombing runs. The fighting in Syria is in urban centers and the rebel groups, whether extremist or moderate, carefully avoid moving in large formations.

Russia has said it has no intention of committing ground troops.

Carter on Wednesday stressed that the coalition was going to continue its strikes against the IS group.

“We don’t intend to make any changes in our air operations,” he said.