Palestinians celebrate the raising of their flag at UN 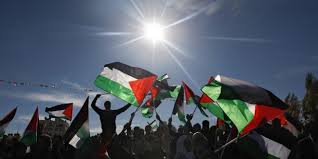 Palestinians in the West Bank celebrated president Mahmud Abbas’s United Nations General Assembly speech on Wednesday and the raising of their flag at UN headquarters for the first time.

In Ramallah, the seat of the Palestinian Authority in the occupied West Bank, hundreds of people gathered to watch his speech in front of a huge screen at Arafat Square.

They cheered loudly and waved flags as he spoke.

“Palestine, which is an observer state in the United Nations, deserves full recognition and full membership,” Abbas said.

The Palestinian leader also threatened to withdraw from the Oslo accords of the 1990s signed with Israel.

“They leave us no choice but to insist that we will not remain the only ones committed to the implementation of these agreements, while Israel continuously violates them,” Abbas said.

The crowd in Ramallah cheered and clapped, breaking out in chants of “With our souls and blood we sacrifice for you, Palestine”.

At a ceremony following the speech, the Palestinians raised their flag at the seat of the United Nations for the first time.

“In this historical moment, I say to my people everywhere: raise the flag of Palestinians very high because it is the symbol of our identity,” the 80-year-old Abbas said.

“The occupation (Israel) doesn’t want a (Palestinian) state and the Israeli rightwing government is putting all the obstacles in front of a just peace,” he told AFP after the Abbas speech.

While many Palestinians were supportive of the speech, some felt it fell short of its build-up.

“This speech did not meet the expectations of the Palestinian people in comparison to what was said in the media a month ago,” a man identifying himself as Mohammed said.

“We expected the speech to include other issues, be stronger and push Israel more.”

Giant screens were also set up for the speech in the northern West Bank city and in Hebron in the south, where dozens of Palestinians marched through the streets and fired shots in the air.

Hamas, the Islamist movement that rules the Gaza Strip, was reserved in its reaction.

“The speech was emotional, and will be judged by how long it takes him to implement his commitment to end the agreements with the Israeli occupation,” said spokesman Sami Abu Zuhri.