PM Salam: Using Lebanon as a proxy to settle scores will lead to its destruction 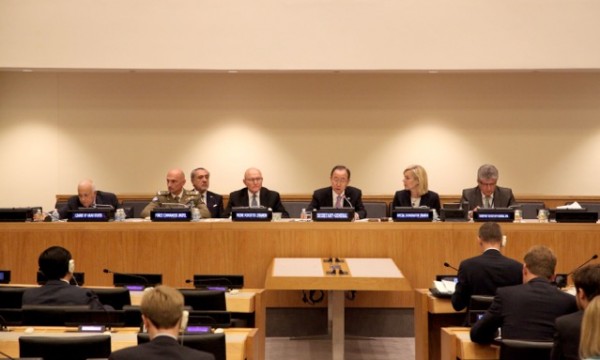 Prime Minister Tammam Salam warned   Wednesday  against  using Lebanon as a proxy to settle regional scores   and said   this will lead to the destruction of this bastion of moderation, coexistence and freedom.”

He  made the statement during a ministerial-level meeting of the International Support Group for Lebanon at the U.N. headquarters in New York.

The meeting was chaired by U.N. chief Ban Ki-moon and saw the participation of China, France, Russia, Britain, the U.S., Germany, Italy, the European Union, and the Arab League.

“Decisions and actions that you will adopt this time, are more crucial than ever before, in view of the escalating threats to Lebanon: a presidential seat that has been vacant for over 16 months, an alarming internal security situation, and a foreboding terrorist presence right on our Eastern border,” Salam told the conferees.

He noted that “the cumulated institutional effects of the absence of a President of the Republic have led to a quasi-paralysis in the executive policy-making process, and to a serious obstruction of legislative activity.”

Salam called on all the countries that have assisted the Lebanese army to “continue their indispensable backing without waning.”

He also said his call is addressed to “all those who can positively influence the holding of the democratic election of a President in Lebanon.”

He warned that “using Lebanon as a proxy to settle regional conflicts will lead to the destruction of this bastion of moderation, coexistence and freedom.”

In his speech before the U.N. General Assembly later on Wednesday, Salam appealed for assistance from the international community to help deal with the overwhelming number of Syrian refugees in Lebanon.

He said public infrastructure and hosting communities have been exhausted “to the limit” while international assistance has been steadily declining because of so-called “donor fatigue.”

Accordingly, Salam called on the donors to “double” their assistance to Lebanon.

Lebanon is sheltering more than 1.5 million displaced Syrians, who amount to one third of its population.

Salam also called on world powers to “stop fighting with Syrian blood and on Syrian territory,” urging them to end the ongoing massacres in that country.

Turning to the Lebanese affairs, the premier called on Lebanon’s “brothers and friends” to “keep Lebanon away from regional polarization” and to “help Lebanese end the current state of vacuum and paralysis and restore regularity in state institutions through the election of a new president.”

Meanwhile, U.N. chief Ban Ki-moon welcomed during the Support Group’s meeting “the generous support of donors” but noted that “this has not matched the country’s exceptional needs.”

“Resources are insufficient. Needs are rising. If we do not bridge this gap, there will be far-reaching consequences for the region and beyond,” he warned, encouraging bilateral partners to “expedite support where the Lebanese Armed Forces need it most so that they can effectively address security threats.”

Ban pointed out that international support to Lebanon can only contribute to sustainable stability “with functioning State institutions, particularly the Government and Parliament.”

“The absence of a President for 16 months is causing deeper polarization, paralyzing government decision-making, and generating understandable public discontent,” he cautioned.

“The political stalemate undermines stability and limits the impact of international support. The support of this Group demands action by Lebanon’s leaders to resolve the political crisis without delay,” said the U.N. chief.

In an official statement, the International Support Group expressed “deep concern over the 16-month vacancy in the Presidency of the Republic,” saying it “seriously impairs Lebanon’s ability to address the security, economic, social and humanitarian challenges facing the country.”

Recognizing the “increased terrorist threat to Lebanese civilians,” the Group reiterated the need for “a comprehensive counter-terrorism response, including via further international support to Lebanese security services.”

The Group stressed, however, that “if strong international support is to contribute effectively to sustained stability, it must be paralleled by determined action by Lebanon’s leaders to resolve the political stalemate.”