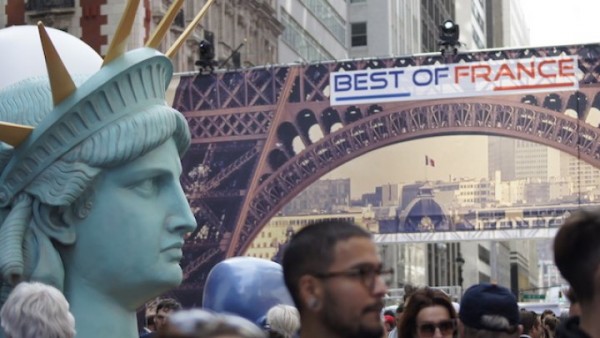 An all-American landmark was transformed into a den of French clichés on Saturday as dozens of French artists, entrepreneurs and restaurateurs moved into Times Square to exhibit at what organisers have christened the “Best of France” festival.

Three blocks on Manhattan’s busy Broadway were blocked off to make room for the tourism, fashion and food fair, housing dozens of food and drinks tents, a mini pétanque (French boules) court and a giant replica of the Statue of Liberty (lest we forget the French gave the statue to the US in 1886).

Hundreds of thousands of Francophiles attended on the first day alone, swarming around a Président stand for a free slice of French bread and butter before a troop of cancan dancers from the Moulin Rouge — who were performing in New York for the very first time — outshone the allure of the staple treat.

A thoroughly friendly event, public displays of co-adulation between France and the US were at some points overbearing. The festival opened with the national anthems of both countries (performed by a full choir, no less), before the world’s largest US and French flags were unfurled, and later in the day, a gushing Hollywood-esque dramatic film applauded the US’s rescue of France in World War II.

French Foreign Minister Laurent Fabius officially opened the event before heading back to the UN General Assembly (presumably for more challenging encounters). “It’s really important to show the diversity of French talent,” he told FRANCE 24. “It’s all about quality and creativity.”

For artists Louisa L. and Nadine Debien, who were showcasing their paintings and sculptures, the opportunity was “magical”.

“Times Square is kind of the centre of the world, so it’s really crazy to be presenting our art here,” Debien told FRANCE 24.

A baker of the basque cake — which has yet to become as ubiquitous as macaroons, croissants and canelés — was handing out free pieces of the dessert to promote the launch of its appearance in the Whole Foods supermarket as of January.

“It’s certainly going down well so far,” Christophe Garcia, who struck the deal with Whole Foods after realising that Americans had been missing out on the treat, told FRANCE 24, as a stream of people filed by to try it.

Another baker, chef Claude Goddard of the Madison Bistro in Midtown Manhattan, had created the painstakingly binational “croissnut”.

Amadu Togo, who was working Goddard’s croissnut stall, seemed genuinely excited about the pastry. “Of course it’s better than a donut,” he told FRANCE 24, “I mean, it has the croissant too!” Togo said he had already eaten two croissnuts for breakfast.

Inside a refrigerated tent, dairy artisans Jim Victor and Marie Pelton carved a 1,000-kilo slab of butter into a slippery replica of Paris. The pair, who have been carving butter for 20 and 15 years respectively, said it had taken seven days to create the city, which was in its final stages.

Even military aircraft giant Dassault was on show, apparently to promote its Falcon jet as “a truly Franco-American product”. The jets are assembled in France but completed in Arkansas, sales manager Jean de Looz explained, making Best of France “unmissable” for the company.

President François Hollande, who is in New York for the UN General Assembly, will attend the event on Sunday afternoon.