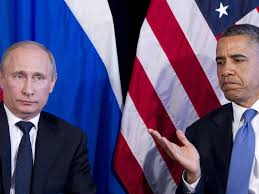 By Ralph Peters
The late, great strategist Yogi Berra claimed that “you can’t predict the future.” Well, if you remove your partisan lenses and analyze a situation objectively, you can sometimes come very close to projecting an adversary’s next move.

The coming US-Russia clash in Syria is a good example.

Vladimir Putin’s next strategic gambit may be to order the shootdown of an American military aircraft over Syria. If we’re “fortunate,” it will only be an unmanned airframe he chooses to make his point.

But it may be a manned fighter. Putin is confident that the Obama administration wouldn’t respond militarily, but would eagerly accept his explanation that the shootdown was an accident, a simple misunderstanding.

Why would Putin do it? Why take such a risk?

Because he sees little risk. Because he wants the United States out of the region and Russia in. Because the lack of a US military response would be read globally as an American defeat and retreat — and a Russian victory. Because he realizes that the lack of retaliation would crush American military morale.

And because he enjoys humiliating the American president.

Because Putin didn’t go to the right prep school and has poor table manners, Western elites continue, even now, to underestimate his intelligence, his strategic vision and his ruthlessness. Putin cynically portrays his intervention in Syria as part of a common fight against the Islamic State. But the immediate target of his military will be the (relatively) moderate Syrian opposition, leaving the West with a choice between Bashar al-Assad and Islamist fanaticism.

Putin has a vision of a wall of Iranian-dominated, Russia-friendly, anti-American states stretching from western Afghanistan through Iran, Iraq, Syria and Lebanon to the Mediterranean Sea. And he’s well on his way to achieving it, thanks to the nuclear deal with Iran, US military hesitancy in the region and, now, an open alliance between Russia, Iran, Iraq’s Shia militias, Hezbollah and the forces of the Assad regime.

That wall would not only keep out the United States, it would isolate our Kurdish allies and overshadow our last clients in the region, including Israel (which has already moved to improve relations with Moscow).

It gets worse. The US approach (it can’t be called a strategy) to the region’s web of crises has been so superficial and focused on a minimalist and non-integrated menu of tactics that it has left our forces vulnerable on multiple levels — even if the Obama administration wished to respond militarily to a shootdown.

Were we to take on Russia in the skies over Syria, our advisers in Iraq (those outside of Kurdistan) would immediately become the hostages of Shia militias. Turkey would be pressured by Russia to restrict our use of Incirlik airbase and other facilities, crippling our capability to respond. And Iran could create a crisis in the Persian Gulf and effectively close the Strait of Hormuz.

There is no sign that we are even war-gaming this scenario.

So what should we do (Shto dyelat? in Russian)? As soon as Putin deployed his military forces to Syria, we should have announced that we will arm the Ukrainian military with contemporary weapons and provide a significant training presence. We should, immediately, withdraw our advisers from Iraq outside of Kurdistan (our efforts in Anbar Province have failed miserably, in any case). And, above all, our pilots over Syria, Iraq and the eastern Mediterranean should be given very liberal rules of engagement, including pre-emptive self-defense.

Finally, any attack on a US manned aircraft over Syria should result in our forces immediately sweeping the skies of Russian planes and drones.

Would that precipitate a war? No. Putin’s a master of the bluff. He knows his forces can’t defeat the US military. But he relies on the psychology of the current US president, who has, to date, proven indecisive in crises and reluctant to respond to force with force.

Putin’s a classic bully. The American willingness to continue to act as his feckless victim only guarantees that, having taken our lunch money, he’ll do his best to take the Middle East.

NY POST
Ralph Peters is Fox News’ strategic analyst and the author, most recently, of “Valley of the Shadow,” a novel of the Civil War.