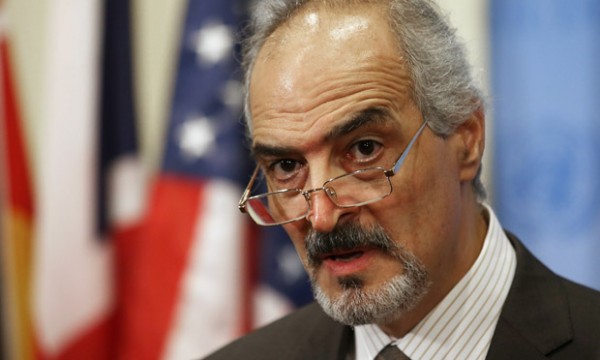 Syria’s ambassador to the UN criticized France on Sunday for carrying out a series of airstrikes on an Islamic State training camp in Syria.

Bashar Jaafari argued that the attacks were not coordinated with Damascus, according to Russian news agency TASS.

“The French president has not coordinated those actions with the Syrian president,” he told TASS.

“This is an American coalition, not an international one and it is not based on the Security Council’s resolution and is not supported by a consensus,” Jaafari continued.

Jaafari criticized French President Francois Hollande for calling for a regime change in Syria on Sunday.

“Words of the kind are clueless, especially at the UN headquarters,” he said, adding that France has no right to “fight terrorism this way — unilaterally.”

France carried out its first air strikes against the Islamic State group in Syria on Sunday, launching a military operation as Russia and Western powers sought the upper hand in shaping the future of the war-torn country.

Hollande said six French warplanes hit an IS training camp near the eastern city of Deir Ezzor, and that more air strikes could follow in the coming weeks.

The action came on the eve of the UN General Assembly in New York where Syria is in the spotlight after four years of a brutal war that has killed more than 240,000 people and sent hundreds of thousands of refugees fleeing to Europe.

After sending troops and fighter planes to Syria, Russian President Vladimir Putin is set to push for stepped-up military action against IS jihadists in a joint effort with regional players.

“We have proposed to cooperate with the countries in the region. We are trying to establish some kind of coordinated framework,” Putin said in an interview with CBS television.

“We would welcome a common platform for collective action against the terrorists,” he said.

A commander in the Syrian army was among those said to be injured when the Israeli army hit two Syrian army positions located on the Golan Heights on Sunday.

According to Arab media reports, the deputy brigade commander of the 90th battalion sustained moderate wounds during the strike which was carried out in response to a rocket fired from Syria that strayed into the Israeli sector of the Golan Heights.

The Israeli military said the rocket crashed into a field without causing any casualties or damage.

It said that it was the result of Syria’s conflict in which various factions are fighting against the regime of President Bashar al-Assad, as well as each other.

The Syrian Observatory for Human Rights said the Israeli fire targeted army positions in a town in southwest Quneitra province, on the Golan.

The military said the Syria rocket crashed into a field without causing any casualties or damage.

It said that it was the result of the civil war in Syria, where various factions are fighting against the regime of President Bashar al-Assad, as well as each other.

On Saturday, a similar incident occurred, with a rocket slamming into the Israeli-held part of the plateau also without causing injuries or damage.

Since the Syrian conflict erupted in 2011, the Golan has been tense, with a growing number of mostly stray rockets and mortar rounds hitting the Israeli side, prompting the occasional armed response.

Israel seized 1,200 square kilometers of the heights in the Six-Day War of 1967 and later annexed it in a move never recognized by the international community.

Syria contact group including Russia, US to meet in October: Moscow

Russia and the United States are expected to take part in Syria peace talks in October, along with Iran, Saudi Arabia, Turkey and Egypt, Russia’s deputy foreign minister said Monday.

A meeting of an international contact group of the “most influential outside players” will “be pushed forward to October after the UN General Assembly,” deputy foreign minister Mikhail Bogdanov said, quoted by RIA Novosti news agency.

“We have named the participants: Russia, the US, Iran, Saudi Arabia, Turkey and Egypt,” Bogdanov said, adding that others could also be invited.

Russia wants the talks to happen “as quickly as possible,” he added.

Bogdanov said the makeup of the contact group had not yet been decided but could include the countries’ foreign ministers.

“The level hasn’t been decided yet. I think it will be working at multiple levels: experts, deputy ministers and ministers if necessary.”

He said the group would meet after the formation of four working groups on Syria in Geneva and would work together with the UN’s envoy on Syria, Staffan de Mistura.

“Naturally, here it is very important to work in conjunction with the United Nations, with de Mistura,” he said.

De Mistura has said he hoped the working groups, which will involve Syrians, could lay the ground for the country’s warring factions to find a political solution to the conflict.

Vladimir Putin has sent troops and aircraft to war-torn Syria in support of Assad’s regime.

Putin is calling for a new coalition to fight the Islamic State jihadists who have seized swathes of Syria and Iraq that would include Russian forces and Assad’s regime.

Putin is set to make a major speech at the UN General Assembly in New York later Monday, before holding his first official meeting with US President Barack Obama in over two years.