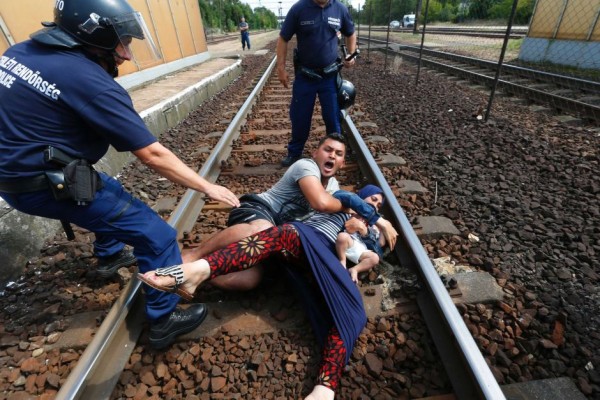 With Europe’s refugee crisis escalating, European leaders on Tuesday approved a plan to spread asylum seekers across the continent over the objection of Central European nations.

The plan to distribute 120,000 migrants across Europe is a first step toward easing the plight of the men, women and children who have been shunted from one European nation to another in recent weeks, a grim procession of human need in one of the world’s richest regions.

But the decision to override the dissenters means the European Union will be sending thousands of people to nations that do not want them, raising questions about both the future of the ­28-nation bloc and the well-being of the asylum seekers consigned to those countries. Hungary, Romania, the Czech Republic and Slovakia voted against the measure, a rare note of discord for a body that usually operates by consensus on key matters of national sovereignty. Finland abstained.

For all the controversy, the plan would find homes for just 20 days’ worth of new arrivals to Europe, a measure of the scale of the crisis and the baby steps the continent has taken to address it. E.U. leaders will meet in Brussels on Wednesday to discuss broader measures to stem the flow, including bolstering the region’s border controls and stepping up support for the overburdened refugee camps along Syria’s borders.

But after Tuesday’s bitter vote, it was unclear how much common ground remained among leaders.

Wealthy nations such as Germany have faced tens of thousands of asylum seekers arriving every week. Leaders there have welcomed Syrians fleeing their war-ravaged country, but they have also said they cannot shoulder the entire burden on their own.

“We are doing this out of solidarity and responsibility, but also out of our own interest,” German Interior Minister Thomas de Maizière said after the meeting. He said the agreement would “prevent more people who are currently in Greece from coming to Germany.” The country expects up to 1 million asylum seekers this year alone.

A first step
Proponents of the plan acknowledged Tuesday that it was just a first step to address the much bigger crisis. According to the U.N. refugee agency, more than 477,000 people have arrived in Europe so far this year via often-dangerous sea crossings, and 6,000 now land on Europe’s shores every day — up sharply even from August, when this figure stood at about 4,200 a day.

Germany’s national railway company announced Tuesday that it was suspending rail service to Austria because its trains have been overwhelmed with refugees. It was the latest example of national infrastructure apparently unable to meet the challenge.

Central European leaders condemned the vote, warning that Europe would suffer as a result of the plan to force them to accept asylum seekers.

A look at the numbers behind the stream of refugees flowing into Europe as political leaders struggle to ease the burden. (Jason Aldag/The Washington Post)
“Very soon we will see that the emperor has no clothes,” Czech Interior Minister Milan Chovanec said on Twitter. “Common sense lost today.”

The numbers will be drawn from Syrians, Iraqis and Eritreans coming ashore in Greece and Italy. Germany, France and Spain will take the most. Of the 120,000 spots approved on Tuesday, only 66,000 were immediately assigned to specific countries, with the rest to be assigned later. An additional 40,000 slots were agreed to earlier in the summer.

The final agreement did not include an earlier proposal to penalize countries that did not take in asylum seekers, so it was not immediately clear how the E.U. would deal with nations that refuse to comply with the plan.

At least one country, Slovakia, said after the decision that it would not take in any of the migrants.

“As long as I am prime minister, mandatory quotas will not be implemented on Slovak territory,” Slovak Prime Minister Robert Fico told his parliament’s E.U. affairs committee.

Almost 1,300 people will be sent to Hungary, where Prime Minister Viktor Orban has crusaded against the mostly Muslim asylum seekers, saying they are on a campaign to de-Christianize Europe. He has built a 109-mile ­razor-tipped fence to keep them away from his country’s frontier with Serbia and in recent days has started to expand this barrier to the borders with Romania and Croatia.

Despite Hungary’s opposition to the asylum seekers, a government spokesman, Zoltan Kovacs, said Tuesday that his country would abide by the plan.

“This is a compulsory decision, and we are going to respect it,” said Kovacs. He said Hungary’s leaders looked forward to discussing the “real causes” of the crisis on Wednesday, adding that solutions include reestablishing border controls and improving the refugee camps closer to Syria.

Under the distribution effort, each nation would continue to make its own decisions about whether to grant asylum to individual applicants. Hungary, which grants just a tiny fraction of asylum requests, could continue to be far harsher than Germany, which is relatively generous, particularly to Syrians.

There are few guarantees that asylum seekers would actually stay in the country to which they’re assigned, especially given the lack of border controls between most E.U. nations. Migrants would risk losing benefits if they left one country for another, but, for example, few may want to stay in Poland, next door to Germany’s high wages.

Nor was it immediately clear how E.U. policymakers would take into account the refugees’ preferences. Some countries offer far more generous benefits than others. Many refugees also want to be reunited with family members who already live in Europe.

“They say when you are in Vienna, you can go anywhere,” said Wassim, 28, from Aleppo, Syria, who made it through a bustling border crossing at Nickelsdorf on the Austria-Hungary frontier. He hoped to travel quickly onward to the Netherlands. He gave only his first name out of fear of possible reprisals against relatives in Syria.

Ahead of the E.U. decision, the U.N. refugee agency had pushed hard for action, saying that further delays would create an even more dangerous situation for the streams of people fleeing the Syrian conflict. More than 4 million Syrians have already moved to the neighboring countries of Lebanon, Jordan and Turkey.

“It’s very, very clear that there is a need for a united common response from European countries,” said Adrian Edwards, a spokesman for the U.N. refugee agency.

Despite Europe’s divisions, some refugee advocates said policymakers seem to be slowly coming to terms with the crisis.

“What is widely acknowledged now is that the conditions in Lebanon, Turkey and Jordan are going to become untenable for a large number of people,” said Madeline Garlick, a guest researcher at the Center for Migration Law at Radboud University in the Netherlands. “We are further than we were some time ago.”