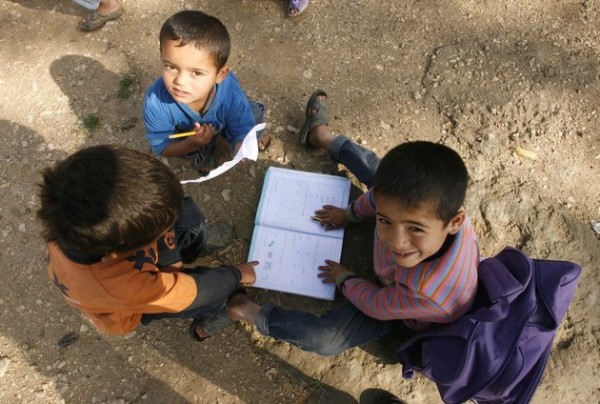 Boys play with a school book at a UNHCR’s camp for Syrian refugees in south Lebanon on April 14, 2015. More than 12 million children in the Middle East are not being educated, despite advances in efforts to expand schooling, the UN children’s agency UNICEF said. The figure does not include children forced from school by the conflicts in Syria and Iraq, who would bring the total not receiving an education to 15 million, the agency said in a new report. AFP PHOTO / MAHMOUD ZAYYAT (Photo credit should read MAHMOUD ZAYYAT/AFP/Getty Images)
Share:

Lebanon is to provide schooling for tens of thousands more children this year including Syrian refugees, the education ministry said on Monday, as the country tries to cope with the effects of the war next door.

Funding from international donors, UN refugee agency UNHCR and children’s fund UNICEF could see up to 100,000 more Syrian children, twice the number of last year, attend public schools for free, the ministry and organisations announced at a joint news conference.

With Lebanon hosting the highest proportion of Syrian refugees – 1.5 million in a country of 4 million people – some public schools already have more Syrian than Lebanese students.

Lebanon stopped UNHCR registering Syrian refugees in May in an attempt to cope with large numbers of people fleeing the four-year-old civil war.

“You all know the impact of the crisis in Europe… 120,000 refugees in the whole of Europe shook the world,” Education Minister Elias Bou Saab said.

“A million and a half refugees for 4 million people in Lebanon – what do you think this has caused for us?”

The foreign minister recently called on other Arab countries and the wider international community to share the burden in hosting Syria’s 4 million refugees, most of whom are in neighbouring Lebanon, Jordan and Turkey.

International donors and organisations have provided $94 million for the “Back to school” campaign, which could see up to 367,000 children through middle school attend for free including 200,000 Syrians.

Many schools will be required to operate extra classes to accommodate the numbers.

There remain some 200,000 refugee children not enrolled in formal education in Lebanon, according to UNICEF, including children working to provide for their families.

Syria’s civil war has killed an estimated 250,000 people, and many continue to flee their homes, with 4 million refugees and another 7.6 million displaced inside the country.