ISIS plotting to weaken U.S. dollar and replace it with gold 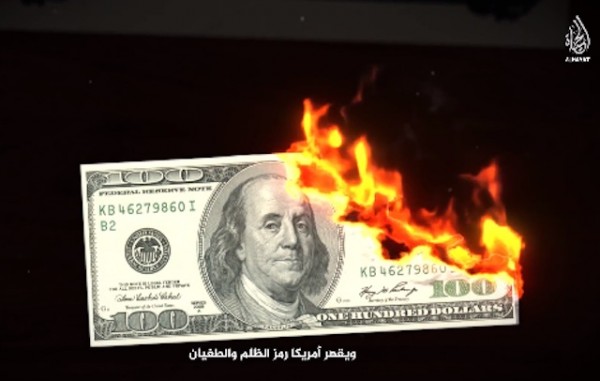 The Islamic State group revealed over the weekend that at the centerpiece of its goal to bring down America is a concerted effort to weaken the U.S. dollar and replace it with gold currency.

A video posted Saturday warned of the “dawning of a new age” in which replacing the dollar with gold would deliver “the second blow to America’s capitalist financial system of enslavement … casting into ruins their fraudulent dollar note.”

The first blow, it said, was the September 11 attack on the World Trade Center.

The English-language video included archival footage from U.S. news channels, including a 2007 clip of Ron Paul sounding the alarm over the vulnerability of the dollar.

Produced by the Islamic State’s Al Hayat Media, the extremist Sunni group positioned itself as leading the fight against fiat currency by minting caliphate gold, silver and bronze coins. It named them after historical Islamic caliphate coins: the gold dinar, the silver dirham and the bronze fals (or the plural fulus).

Its dedication to gold – and opposition to paper notes – was grounded in the Quran, excerpts of which appeared onscreen in the video.

The 55-minute video, posted on forums used by the jihadist group’s supporters, reviewed international monetary policy since World War I to make its case against the dollar.

The American-accented narrator accused the U.S. of “heading a capitalist financial system of enslavement underpinned by a piece of paper called the Federal Reserve dollar note which they alone printed and imposed on the rest of the world.”

The Islamist group likened its military efforts, shown in a montage of exploding buildings and militants firing their automatic weapons, to financial warfare against America’s “satanic financial system.”

It described the introduction of its gold dinar coin as “blessed” by Allah, as the “prophesy of prophet now unfolding” and as an effort to “purify the earth of corruption.”

The group vowed that in the future, it would sell oil only in exchange for gold, not “fraudulent” paper bills.

The video railed against the modern financial system, including the unbridled printing of banknotes, “abhorrent” interest, fractional-reserve banking, deficit spending, and the petro-dollar system.

“One of the great forms of corruption that the world came to witness was the dark rise of banknotes borne out of the satanic conception of banks which mutated into a fraudulent … financial system of enslavement orchestrated by the Federal Reserve in America, a private corporation and system that would, through the use of deceit and force, deprive people of their due by imposing on them the usage of the piece of paper that came to be known as the dollar bill,” the narrator said.

“It is the Federal Reserve banknote that they alone print and would go on to replace gold and silver which Allah created as the standard mediums of exchange for the purchase of goods and services,” he added.

The video was filled with anti-Semitic comments and boasted of the Islamic State group’s honesty in producing its coins, making sure it is of proper purity, using even weights to avoid fraud.

It also touted other plusses of using gold, which can be divided into smaller pieces and melted into jewelry, ensuring wealth maintenance.

The Islamic State group described the U.S. abandoning of the gold standard as a “great theft.”

“The dollar has in fact lost almost all of its value since the Federal Reserve came into existence,” the video asserted.

To drive home its point, it included a 2007 clip of then U.S. Congressman Ron Paul describing how the devaluation of the dollar robs people of their savings.

“People’s money being stolen, people who have saved. They’re being robbed. If you have a devaluation of the dollar at 10 percent people have been robbed of 10 percent,” Paul said.

In June, the jihadist group posted photos of its freshly minted coins that reportedly were inspired by the original dinar used during the Caliphate of Uthman in 634. One side of the coin showed a map of the world, reflecting the Islamist organization’s designs to spread the caliphate around the globe.