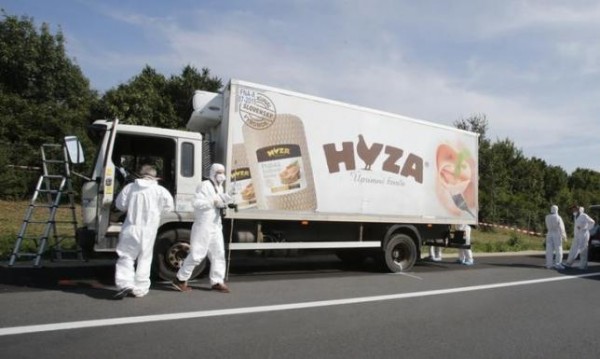 Forensic police officers inspect a parked truck in which up to 50 migrants were found dead, on a motorway near Parndorf, Austria August 27, 2015. REUTERS/Heinz-Peter Bader
Share:

Distraught over missing relatives en route from Syria to western Europe, two young men waited anxiously on Friday for news outside Vienna’s forensic department, where some of the bodies of 71 dead migrants found in Austria have been brought.

“We have not heard from them in three days. Last time we heard, they were in Hungary,” one of the young Syrian-Kurdish men said, declining to give his name for fear of upsetting his family back home.

He said the missing adults were his cousin and another cousin’s spouse.

“And the worst thing is: we tried to contact the smuggler in Hungary, who was meant to take them to Austria, but he has switched off his phone,” he added, with hands shaking and tears in his eyes.

The 71 dead men, women and children, presumed to have been on their way across Europe from Syria, or possibly Afghanistan, were discovered in an abandoned truck on a highway on Thursday. They appeared to have suffocated.

The news sent waves of shock and mourning through Austria.

“It is crazy, something like that. I am completely stunned… It has really shocked me,” said Waltraud Winkler, walking on a busy shopping street in the center of Vienna.

The bodies are now with forensic examiners who are working around the clock to hunt for clues of the victims’ identities and establish the cause of death.

“Who will stop that madness?” asked daily Kurier in bold white letters on its black front page. Meanwhile Kronenzeitung showed a picture of the truck with one back door open and the bodies of several migrants piled up inside, under the headline “Crammed in like rubbish.”

Carla Amina Baghajati, spokeswoman for the Islamic Religious Authority in Austria and married to a Syrian, said her organization would help those affected in Austria and elsewhere.

“The big problem is to identify the victims, and there is a Syrian community here,” she said. “And by way of Facebook, by way of reaching out for possible contacts, we have an easier way to make contact than the official authorities.”