Lebanon: Shiny on the outside, rotting from the inside 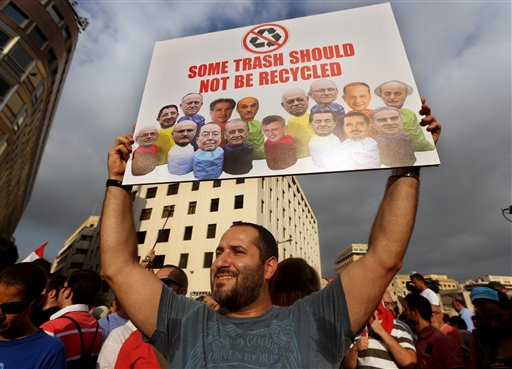 In this August 22, file photo, a Lebanese activist holds a poster with pictures of Lebanese Cabinet ministers during a protest against the ongoing trash crisis, in downtown Beirut, Lebanon. To the casual visitor, Lebanon may look like a relative success story: a tiny slice of modernity and coexistence in a turbulent region plagued by violence and extremism _ but the reality is quite different. For residents, it is a failed state eaten away by a sectarian political class, AP
Share:

To the casual visitor, Lebanon may seem like a tiny slice of Mediterranean modernity and coexistence in a turbulent region plagued by violence and extremism.

But for many Lebanese, it’s a rotting state eaten away by a political class that has long used the country’s sectarian power-sharing system to perpetuate corruption and nepotism.

And while recent protests over uncollected trash have challenged an arrangement almost universally denounced by Lebanese, they also can’t seem to shake it. Many argue that system is what has allowed the country of 4.5 million people from 18 recognized and often rival sects to survive.

“You Stink,” the main activist group behind the protest movement, has called for a massive demonstration on Saturday. Its campaign started over the fetid piles of trash mounting in Beirut’s streets after the government closed the country’s main landfill, but it has mushroomed into a movement against the entire political structure.

At the heart of Lebanon’s problems, some say, is an unwritten arrangement since Lebanon’s 1943 independence which stipulates that the country’s president must be a Christian, the prime minister a Sunni Muslim and the speaker of parliament a Shiite Muslim — the three largest communities.

The agreement was further enshrined in the Taif Accord, which ended Lebanon’s 1975-90 civil war, and requires that the parliament and Cabinet must be half Muslim and half Christian. The sectarianism trickles down to other posts, including the army commander and central bank governor, who are traditionally Christians, and the deputy prime minister, who has to be Greek Orthodox.

Critics contend it’s a recipe for a weak central government. Politicians largely act as the voices of their sect and engage in cronyism and patronage for their communities.

“What we have in Lebanon is a consortium of sectarian networks operating as social welfare providers in various regions under religion auspices, with sectarian and local leadership substituting almost everything that the government should be providing,” said Imad Salamey, associate professor of political science at the Lebanese American University.

At the same time, the system creates a delicate balance of power that no side is prepared to disrupt as the key to Lebanon’s tenuous stability.
The Iranian-backed Shiite Muslim Hezbollah movement is a prime example.

By far the strongest political force in Lebanon, it’s on the U.S. State Department’s list of terrorist organizations, has engaged in several devastating wars with Israel and has sent thousands of fighters to shore up President Bashar Assad’s forces in Syria — all controversial moves in Lebanon. Its guerrilla army is at least as well-armed and trained as the Lebanese military, and for Shiites it provides an elaborate social welfare network that includes schools, hospitals and clinics.

It dominates local politics and came close to carrying out a coup in 2008. But it has also been meticulously mindful not to go too far and spark a backlash from other sects that would wreck a status quo it benefits from.

“Lebanon has managed to avoid drifting toward total collapse and it has also avoided moving toward dictatorship largely because of this balance of power between the various sects,” Salemey said.

That balance has an impact beyond politics. Hezbollah has a fundamentalist Shiite ideology and Lebanon has plenty of Sunni conservatives, but no faction is strong enough to try to impose strict Islamic mores on Lebanon’s freewheeling society. With no one force totally in charge, Lebanon has perhaps the freest media in the region. That, along with its Mediterranean beaches, bars and a renovated downtown in Beirut, gives the country an air of liberal modernity.

Others say the problem lies not in the governing system, but in the political class itself, which never rose above the warlord-style governance of the civil war.

Key decisions remain in the hands of political dynasties that gained power because of immense wealth or by commanding powerful militias during the war.

For example, former president Amin Gemayel passed on leadership of the Christian Phalange party to his son, Sami. Walid Jumblatt, leader of the Druze sect, has been gradually handing over the reins to his son, Taymour. Former army commander Michel Aoun this week passed on leadership of the Free Patriotic Movement to his son-in-law, the current foreign minister, Gibran Bassil. Parliament speaker Nabih Berri, who leads the Shiite Amal militia, has been in his post for 23 years.

Amid the divisions, government dysfunction has worsened. There hasn’t been a parliament election since 2009, and lawmakers have unconstitutionally extended their terms and pushed backed elections twice, ostensibly for security reasons linked to Syria’s civil war. There has been no president for 15 months, despite nearly 30 attempts by parliament to convene to elect one.

It took nearly a year to agree on a new government after the prime minister resigned in March 2013. But now the government is paralyzed by disputes about decision-making with no president to chair the meetings. Parliament has not voted on a budget in years, letting the Cabinet simply write its own. Lawmakers have never met to discuss policies to deal with the influx of hundreds of thousands of Syrian refugees that has strained education, health and electricity to their limits.

As a result, Lebanon is one of the most backward Mideast countries in terms of infrastructure and development. Corruption and red tape hamper investment, there is no proper health care plan and Lebanon’s Internet connection is one of the slowest in the region. Most irksome to the Lebanese are the extensive power cuts, which persist 25 years after the civil war ended.

That’s partly because some lawmakers and other politicians run profitable businesses in the power generators that provide electricity to homes for exorbitant fees. Many make millions in construction and real estate and receive a cut from monopolies on telecommunications, gas and other commodities.

Many Lebanese acknowledge they have only themselves to blame because they keep electing the same people to parliament, either for narrow interests or religious loyalties.

For many, the indignity of the trash crisis was the last straw. Even if the sectarian system is too big to throw out, at least new politicians can be brought in who will pay attention to public needs, they say. One of the most popular protest banners shows the faces of a dozen top politicians under the declaration: “Some trash should NOT be recycled.”

“The first thing we are going to ask for tomorrow is new parliament elections,” said Amal Hamra, a 37-year-old advertising agent, speaking at a small protest in Beirut on Friday. “We are done with bringing back the same people who spend their time vacationing outside Lebanon while we live in filth!”

Hazem al-Amin, a columnist for Lebanon’s pan-Arab daily Al Hayat, said the trash crisis has provided a moment for people to revolt against politicians who have long taken its constituents for granted.

“There is a sense among all people that the decay can no longer be overlooked,” he said.