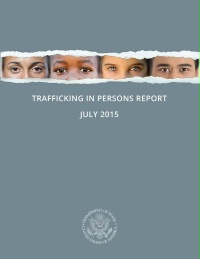 The United States has placed Lebanon on the “Tier 2 Watch List over Human Trafficking.

The US Department of State report which rates 188 countries on their efforts to stamp out trafficking in persons, places each country onto one of three tiers based on the extent of their governments’ efforts to comply with the “minimum standards for the elimination of trafficking” found in Section 108 of the TVPA”.

The report is the State Department’s key weapon for combating human trafficking, and comes in an annual ranking in “tiers”— Tier 1 is best, 2 means more could be done, and 3 is a blacklist that can spark sanctions.

“While Tier 1 is the highest ranking, it does not mean that a country has no human trafficking problem. On the contrary, a Tier 1 ranking indicates that a government has acknowledged the existence of human trafficking, made efforts to address the problem, and complies with the TVPA’s minimum standards. Each year, governments need to demonstrate appreciable progress in combating trafficking to maintain a Tier 1 ranking,” according to the State Department. This year, 18 countries were upgraded and another 18 were downgraded. Those downgraded from the Tier 2 Watch List to Tier 3 included Belarus, Belize, Burundi, Comoros, the Marshall Islands and South Sudan.

According to the State Department, penalties for countries demoted to Tier 3 are at the discretion of the U.S. President, but could include restrictions on non-humanitarian assistance and funding .

“Lebanon is a source and destination country for women and children subjected to forced labor and sex trafficking and a transit point for Eastern European women and children subjected to sex trafficking in other Middle Eastern countries,” said an annual ranking compiled by the State Department and announced by Secretary of State John Kerry on Monday.

The 382-page report called for more “investigations, prosecutions, and convictions of offenders under the anti-trafficking law, including officials complicit in human trafficking.”

The report comes amid controversy surrounding the trafficking of a reported 50 Liberian girls to Lebanon which recently drew a protest before the U.S. Embassy in Monrovia. A petition by protesters was received by Sally Hodgson, the embassy’s head of public affairs who told the gathering that the U.S. was interested in the case. “We have interest in this case. I am going to give this petition to Ambassador Malac very soon,” Hodgson promised. The girls were reportedly trafficked by a Lebanese businessman who had promised to find them jobs and send them to school and many have accused the government of dragging its feet on the case.

At least fifteen of the girls have since been returned to Liberia. But since the girls return, the government has kept the girls at an unknown location, preventing their families – and the public – from interacting with them drawing ire from their families and rights activists. FrontPage Africa recently uncovered the hideout and spoke to some of the girls who informed FPA that they had been abandoned by the government. The case is set to go to trial in August. During the reporting period, according to the report, Liberia reported three investigations, no prosecutions, and no convictions, which represented a decrease from six investigations, two prosecutions, and two convictions in the previous reporting period.

One of the investigations, which involved 10 Liberian women who were allegedly subjected to labor trafficking in Lebanon by a Lebanese national, was pending at the close of the reporting period. “In March 2015, the government sent a high-level delegation to Lebanon to rescue the women and continue the investigation in country. To date, the government has not convicted any Liberian trafficking offenders under Liberia’s anti-trafficking law, despite the country’s significant internal trafficking problem.” The report added that the government did not make any discernible efforts to reduce the demand for forced labor or commercial sex acts during the reporting period.

During the reporting period, Liberian women were subjected to forced labor in Lebanon. Bribery at border stations, capacity issues, and generalized corruption within the judiciary continued to hamper trafficking investigations and prosecutions,” according to FrontPage report.

The Liberian government sent a high-level delegation to Lebanon to rescue 10 Liberian women subjected to domestic servitude and conducted an investigation to determine whether other Liberian women and girls are currently in similar circumstances, the FrontPage report added

The International Labor Organization says trafficking in persons represents a $150 billion-a-year industry, including $99 billion for the sex industry alone.

“Trafficking in persons is an insult to human dignity and an assault on freedom,” Kerry said in the report’s introduction as he called for a comprehensive “fight against modern slavery.”