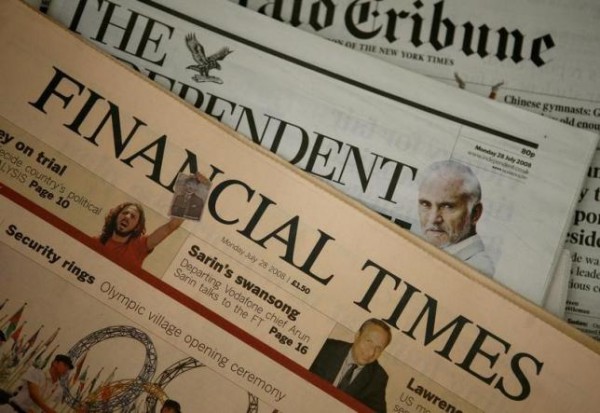 A copy of a Financial Times newspaper is displayed for sale in a newsagent in central London July 28, 2008. REUTERS/Alessia Pierdomenico
Share:
Japanese media company Nikkei Inc. is buying the Financial Times as part of an 844 million-pound ($1.3 billion) deal with Britain’s Pearson PLC.

The deal announced Thursday is part of Nikkei’s strategy to boost its global reach and also allows Pearson to concentrate on its core global education business.

John Fallon, chief executive of Pearson, said the company has been a proud proprietor of the Financial Times for nearly 60 years, but the rapidly changing media landscape meant it’s time for the salmon-colored business daily to change hands.

“We’ve reached an inflection point in media, driven by the explosive growth of mobile and social,” he said in a statement. “In this new environment, the best way to ensure the FT’s journalistic and commercial success is for it to be part of a global, digital news company.”

As part of the deal, Pearson has agreed to sell the vast majority of the assets in FT Group, including the Financial Times newspaper and the popular FT.com. However, Pearson will retain its 50 percent stake in The Economist Group as well as the FT’s London headquarters on the banks of the Thames River.

The sale of the Financial Times has been rumored for some time but the identity of its potential buyer proved something of a surprise. The paper has always been British-owned.

“Nikkei had not been viewed as one of the primary contenders,” said Chris Beauchamp, senior market analyst at IG.

It’s a bold move for Nikkei, the largest independent business media group in Asia. Its core business is newspaper publishing, and its flagship paper, The Nikkei, has about 3 million subscribers.

The deal would be one of the largest-ever acquisitions by a Japanese media company, according to Nikkei Asian Review, one of the company’s outlets.

Digital business news will continue to be a main focus for the FT under Nikkei, the report added. Digital subscription now accounts for 70 percent of the paper’s total circulation base.

The FT and Nikkei have a combined digital subscription of almost 1 million.

Pearson, a leading international education products and services company, acquired the Financial Times in 1957. Fallon, its chief executive, told reporters Thursday that the FT should now switch to a company completely focused on news in order to build on its brand and influence.

John Ridding, CEO of the FT, agreed, adding the deal’s editorial impact was something managers had thought “long and hard and carefully about.”

Ridding said he was confident Nikkei “really walk the talk of editorial independence.”

Nikkei, founded in 1876, also operates media businesses including books and magazines, digital media, database services and broadcasting. In 2013 the company re-launched its English-language outlet, Nikkei Asian Review, online and in print as part of a strategy to expand its coverage from Japan to Asia.

Nikkei bought a minority stake in Britain-based Monocle magazine in 2014, and it also has partnerships with international media firms including Le Monde and Forbes.

Nikkei Chairman and CEO Tsuneo Kita says he is “extremely proud” to team with the FT.

“Our motto of providing high-quality reporting on economic and other news, while maintaining fairness and impartiality, is very close to that of the FT,” he said. “We share the same journalistic values.”

The deal is subject to regulatory approvals and is expected to close before the end of the year.
ASSOCIATED PRESS