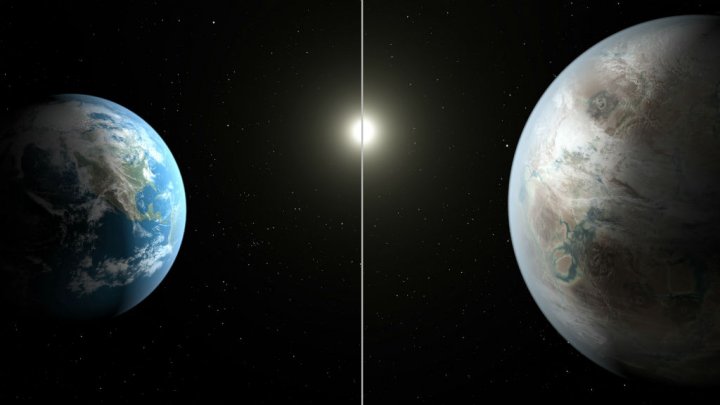 Astronomers hunting for another Earth have found what may be the closest match yet, a potentially rocky planet circling its star at the same distance as the Earth orbits the Sun, NASA said Thursday.

Not only is this planet squarely in the Goldilocks zone — where life could exist because it is neither too hot nor too cold to support liquid water — its star looks like an older cousin of our Sun, the US space agency said.

That means the planet, which is 1,400 light-years away, could offer a glimpse into the Earth’s apocalyptic future, scientists said.

Known as Kepler 452b, the planet was detected by the US space agency’s Kepler Space Telescope, which has been hunting for other worlds like ours since 2009.

“Kepler 452b is orbiting a close cousin of our Sun, but one that is 1.5 billion years older,” NASA said in a statement.

Its star is four percent more massive than the Sun and 10 percent brighter.

If the planet is rocky, and scientists believe that it has a better than even chance of being just that, then it could be in the midst of a fearful scenario, as the heat from its dying star evaporates Kepler 452b’s lakes and oceans.

“If Kepler 452b is indeed a rocky planet, its location vis-a-vis its star could mean that it is just entering a runaway greenhouse phase of its climate history,” said Doug Caldwell, a Search for Extraterrestrial Intelligence (SETI) Institute scientist working on the Kepler mission.

“The increasing energy from its aging sun might be heating the surface and evaporating any oceans. The water vapor would be lost from the planet forever,” he added.

“Kepler 452b could be experiencing now what the Earth will undergo more than a billion years from now, as the Sun ages and grows brighter.”

The Kepler mission launched in 2009 to search for exoplanets, which are planets outside our solar system, particularly those about the size of Earth or smaller.

“Today, and thousands of discoveries later, astronomers are on the cusp of finding something people have dreamed about for thousands of years — another Earth,” NASA said in a statement.

On Thursday, NASA released the latest catalog of exoplanet candidates, adding more than 500 new possible planets to the 4,175 already found by the space-based telescope.

“This catalog contains our first analysis of all Kepler data, as well as an automated assessment of these results,” said SETI Institute scientist Jeffrey Coughlin.

The new catalog includes 12 candidates that are less than twice the diameter of Earth and which are orbiting in the habitable zones of their stars.

Of those 12 new candidates, Kepler 452b “is the first to be confirmed as a planet,” NASA said.

Kepler identifies possible planets by watching for dips in the brightness of stars, which could be caused by a planet passing between the star and the telescope.

Other scientific tools are needed to judge whether the planet is gassy or rocky.

The Kepler mission has cost NASA about $600 million, and the US space agency said in 2013 that two of its orientation wheels had lost function, leaving the space telescope beyond repair.

But scientists have years to pore over the data it has returned in order to narrow the search for Earth-like worlds.