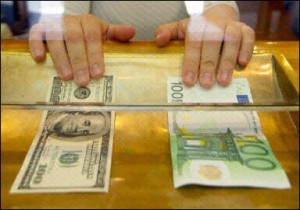 Greek Prime Minister Alexis Tsipras and skeptical European leaders negotiated past a self-imposed deadline into the early hours of Monday, with talks stuck on how Greece would guarantee austerity measures in exchange for a rescue package to prevent its banks from collapsing.

If the talks don’t succeed, some of Greece’s eurozone partners warned, the country could be temporarily forced out of the euro, the European single currency that Greece has been a part of since 2002. No country has ever left the joint currency, which launched in 1999, and there is no mechanism in place for one to do so.

It wasn’t entirely clear what a temporary exit would entail, but the threat put intense pressure on Tsipras to swallow politically unpalatable austerity measures, as his people overwhelmingly want to stay in the eurozone.

The leaders are discussing Greece’s request for a three-year, 53.5 billion-euro ($59.5 billion) financial package. But other leaders in Brussels say Greece needs even more than that, and are demanding tough austerity measures in exchange. It would be Greece’s third bailout in five years.

Several officials, all of whom spoke on condition of anonymity because they weren’t authorized to discuss the negotiations while they were ongoing, said the terms of the austerity package and the timing of its implementation remained serious obstacles.

One of them said the main difference centered on when the European Central Bank could start to increase its emergency liquidity assistance to Greek banks. Greece shut the teetering banks two weeks ago and has limited the amount people can withdraw from their accounts. Without more liquidity from the ECB, the banks can’t reopen without collapsing.

Tsipras wants the ECB to help the banks as early as Monday, the official said, but creditors don’t want the ECB to act until the Greek Parliament passes certain austerity measures. Even if the banks reopen, it’s possible that they could run out of cash even for cash-machine withdrawals this week.

Another of the officials said sticking points included a proposal for Greece to transfer billions of euros worth of state assets to an independent fund in Luxembourg under European supervision. The Greek government is loath to do so.

The 19 leaders of the eurozone countries went into talks Sunday at mid-afternoon and vowed not to emerge without something concrete. They were presented with a set of proposals from the eurozone’s top official, Jeroen Dijsselbloem, who said the sides have “come a long way” in two days of talks among finance ministers.

The deal on the table appeared to include commitments from Tsipras to push a drastic austerity program including pension, market and privatization reforms through parliament by Wednesday, and from the 18 other eurozone leaders to start talks on a new bailout program.

A four-page discussion paper put to eurozone leaders and obtained by The Associated Press spoke of a potential “time-out from the euro area” for Greece if no agreement could be found.

It highlighted the increasing frustration of European leaders during five months of fruitless talks with Greece.

“The most important currency has been lost: that is trust and reliability,” German Chancellor Angela Merkel said Sunday.

Tsipras insisted his government was ready to clinch a deal.

“We owe that to the peoples of Europe who want Europe united and not divided,” he said. “We can reach an agreement tonight if all parties want it.”

Divisions appeared to be growing among European leaders.

French President Francois Hollande insisted it was vital to keep Greece in the euro and said in the event of a departure, “it’s Europe that would go backward. And that I do not want.”

On the other side, Finnish Finance Minister Alexander Stubb said the leaders should talk with Greece about a third bailout only if it passes its austerity measures in parliament.

Traditionally, eurozone ministers agree by mutual consensus, though in exceptional circumstances a unanimous vote may not be needed.

Greece has received two previous bailouts, totaling 240 billion euros ($268 billion), in return for deep spending cuts, tax increases and reforms from successive governments. Although the country’s annual budget deficit has come down dramatically, Greece’s debt burden has increased as the economy has shrunk by a quarter.

The Greek government has made getting some form of debt relief a priority and hopes that a comprehensive solution will involve European creditors at least agreeing to delayed repayments or lower interest rates.

Greek debt stands at around 320 billion euros ($357 billion) — a staggering 180 percent or so of the country’s annual gross domestic product. Few economists think that debt will ever be fully repaid. Last week, the International Monetary Fund said Greece’s debt will need to be restructured.