Iran violating nuclear sanctions even as talks drag on, report 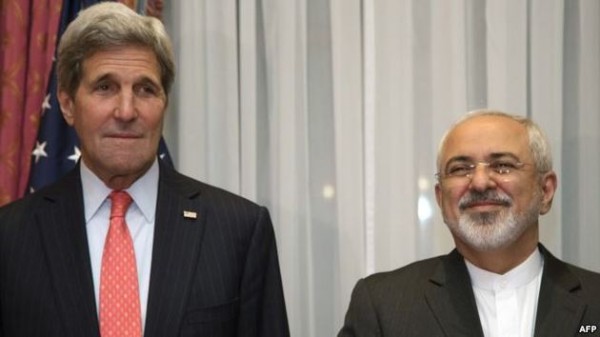 While U.S.-led world powers hold talks with Iran in Vienna to curb Tehran’s illicit nuclear weapons program, the Islamic Republic’s spies have been seeking atomic and missile technology in neighboring Germany as recently as last month, according to German intelligence sources.

Iran’s illegal activities have continued since talks between Iran and the P5+1 – the five permanent members of the UN Security Council as well as rotating member Germany – began with a Joint Plan of Action in 2013, according to German intelligence sources. The JPOA was intended to stop Iran’s work on a nuclear weapon until a comprehensive agreement is reached.

With a final agreement to restrict Iran’s nuclear program set for Monday, the intelligence data from Germany raises disturbing questions about the success of a deal.

“You would think that with the negotiations, [Iranian] activities would drop,” a German intelligence source said. “Despite the talks to end Iran’s program, Iran did not make an about-turn.”

The startling revelations of Iran’s ongoing duplicity first appeared Friday on the website of The Weekly Standard.

Iran has a long history of illegally obtaining nuclear technology from within Germany and transporting it in ways that circumvent international sanctions. German companies have shown an eagerness to legally tap the Iranian market, though none are accused of abetting illegality in the latest efforts by Iran.

Tehran has sought industry computers, high-speed cameras, cable fiber, and pumps for its nuclear and missile program over the last two years, according to German intelligence sources. Germany is required to report Iran’s illegal procurement activities to the UN.

Bloomberg News reported in June that sanctions experts from the Iran UN panel said, “The current situation with reporting could reflect a general reduction of procurement activities by the Iranian side or a political decision by some member states to refrain from reporting to avoid a possible negative impact on ongoing negotiations.”

A nuclear deal with Iran that lifts sanctions could be an economic windfall for Germany. Michael Tockuss, a spokesman for the German-Iranian Chamber of Commerce Association in Hamburg, said annual exports to Iran could rise to the equivalent of $7 billion after a final agreement. The Chambers of Commerce and Industry in Germany sees bilateral trade rising to the equivalent of more than $13 billion annually in a post-sanctions world.

Germany has not taken as skeptical an eye toward the talks as France, whose top diplomat, Laurent Fabius, famously termed the 2013 Iran talks resulting in the JPOA a “fool’s deal.”

Frank-Walter Steinmeier , Germany’s foreign minister, slammed U.S. Senate Republicans for their letter to Iran’s Supreme leader, Ali Khamenei in which they warned that Congress could override a lousy agreement.

“Obviously mistrust is growing…on the Iranian side if we are really serious with the negotiations,” Steinmeier said in March, adding that he hoped “the letter of the 47 senators no longer causes any disturbance in the negotiations.”

US Sen. John McCain, R-Ariz.,  accused Steinmeier of coming from “the Neville Chamberlain school of diplomacy,” in a reference to the World War II-era appeasement diplomacy of the former British prime minister.