The chancellor, sitting a few steps away with a blank expression on her face, scrolled through her smartphone.

Ms. Merkel’s power after a decade in office has become seemingly untouchable, both within Germany and across Europe. But with the “no” vote in Sunday’s Greek referendum on bailout terms posing the biggest challenge yet to decades of European integration, risks to the European project resulting from Germany’s rise as the Continent’s most powerful country are becoming clear.

On Friday, Spanish antiausterity leader Pablo Iglesias urged his countrymen: “We don’t want to be a German colony.” On Sunday, after Greece’s result became clear, Italian populist Beppe Grillo said, “Now Merkel and bankers will have food for thought.” On Monday, Ms. Merkel flew to Paris for crisis talks amid signs the French government was resisting Berlin’s hard line on Greece.

“What is happening now is a defeat for Germany, especially, far more than for any other country,” said Marcel Fratzscher, head of the German Institute for Economic Research, a leading Berlin think tank. “Germany has, at the end of the day, helped determine most of the European decisions of the last five years.”

Senior German officials, in private moments, marvel at the fact that their country, despite its weak military and inward-looking public, now has a greater impact on most European policy debates than Britain or France, and appears to wield more global influence than at any other time since World War II.

Berlin think-tank elites, diplomats and mainstream politicians generally see the rise of German power as a good thing. They describe the stability, patience and rules-based discipline of today’s German governance as what Europe needs in these turbulent times. Germany—with its export-dependent economy and history-stained national identity—has the most to lose from an unraveling of European integration and is focused on keeping the union strong, they say.

Ms. Merkel’s popularity at home has remained strong through the Greek crisis, holding about steady at 67% in a poll at the end of June. She now must weigh whether to offer additional carrots to Greece to keep the country in the euro and preserve the irreversibility of membership in the common currency—at the risk of political backlash at home and the ire of German fiscal hawks. Only 10% of Germans supported further concessions for Greece in another poll last week.

U.S. officials generally see German leadership as crucial geopolitically, praising Ms. Merkel’s push last year to get all 28 European Union countries to adopt sanctions against Russia over Ukraine. But across Europe, Germany’s power is also straining unity in the EU, an alliance forged as a partnership of equals that now is struggling to accommodate the swelling dominance of one member.

With every crisis in which Ms. Merkel acts as the Continent’s go-to problem solver, the message to many other Europeans is that for all the lip service about the common “European project,” it is the Germans and faceless bureaucrats in Brussels who run the show.

The pushback against German power in Europe is likely to grow if the eurozone crisis worsens or if Berlin’s policies grow more assertive.

In Greece last week, it was the stern face of 72-year-old German Finance Minister Wolfgang Schäuble that appeared on some of the posters urging voters to reject Europe’s bailout offer. “He’s been sucking your blood for five years—now tell him NO,” the posters said.

“They want to humiliate Greece to send a warning to Spain, Portugal and Italy,” Hilario Montero, a pensioner at a pro-Greece demonstration in Madrid recently, said of Berlin and Brussels. “The message is you are not allowed to cross the lines they set.”

In Spain, for example, a June poll found Ms. Merkel to be the most disapproved-of foreign politician after Russian President Vladimir Putin, with 54% disapproval. But she also drew one of the higher approval ratings, 39%, besting the leaders of Italy, the European Commission and the United Nations.

The dynamics are similar in France. While more than half of French in a poll last week disapproved of Ms. Merkel’s handling of the Greek crisis, two-thirds of adherents of the main center-right party approved. 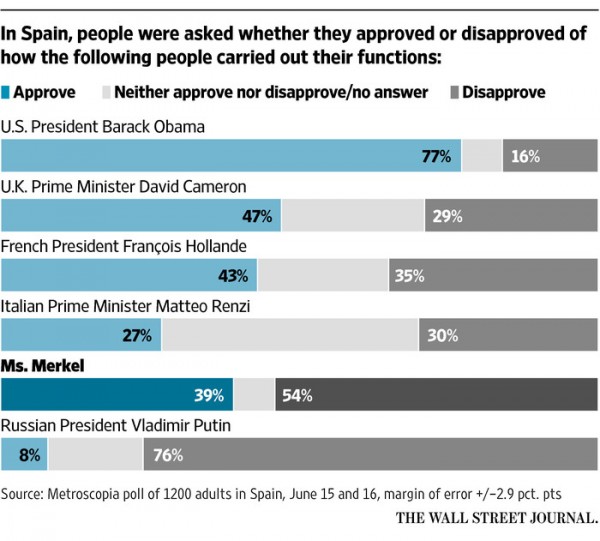 Now Greece presents the most direct test for Ms. Merkel’s Europe. Her government played the biggest role in shaping the austerity-and-reforms conditions for eurozone bailouts and was the most influential voice resisting debt relief for Greece.

After Greece asked for a bailout in 2010, the heads of the European Central Bank and the International Monetary Fund traveled to Berlin to exhort German lawmakers to approve one. A year later, Ms. Merkel pushed for rules establishing greater fiscal rigor across the eurozone. In Spain, the press dubbed her la inspectora.

Last September, then-Greek Prime Minister Antonis Samaras flew to Berlin and appealed to Ms. Merkel. Unpopular economic measures Greece was required under bailout terms to enact—including changes to pensions and taxation as well as the rules involving labor, banks and the public payroll—were feeding the rise of a radical left-wing movement, Syriza, he said.

In February, just hours after Athens sent eurozone finance ministers a letter asking for an extension of its aid program—and before the ministers had the chance to consult one another on it—the German Finance Ministry emailed reporters a brief statement. “The letter from Athens is not a substantive proposal,” it said, quickly stifling discussion of the letter.

Early last week, while some European officials including French President François Hollande publicly held out hope of a deal before Sunday’s referendum, Ms. Merkel quickly signaled there would be no talks before the vote. Her view prevailed.

For several decades, it was the roughly equal tandem of France and Germany that together called the shots on European policy. Because they often disagreed, their compromises typically ended up as palatable to the rest of Europe.

Then a string of developments—including widespread opposition to the Iraq war, former Chancellor Gerhard Schröder’s 2003 market-friendly economic reforms and the taboo-breaking summer of flag-waving when Germany hosted the 2006 World Cup—started to instill a more confident sense of national identity in a country still living in the shadow of the Nazi era. Economic problems in France weakened the country on the European stage, while British politics grew increasingly inward-looking.

In November 2011, Ms. Merkel’s Christian Democrats gathered on the grounds of the centuries-old Leipzig Trade Fair in eastern Germany for an annual party convention and remarked on Germany’s new influence. It had been just over a year since Greece asked for its first bailout. Some Europeans, including the French, initially resisted pushing for heavy doses of austerity in exchange for aid. But Ms. Merkel—the former physicist who grew up under communism and now oversaw Europe’s largest economy—had won the argument.

“All of a sudden, Europe speaks German,” Volker Kauder, the leader of Ms. Merkel’s conservatives in parliament, said in a speech at the convention. “Not in the language but in the acceptance of the instruments for which Angela Merkel fought so long and so successfully.”

Ms. Merkel’s approval rating at home shot up, from around 40% in 2010 to 70% in 2013, a range where it has remained. A yearslong refrain from German politicians helped keep German voters behind Ms. Merkel even as it estranged Europeans elsewhere: Countries seeking help must also do their Hausaufgaben—their homework.

Facing Putin
In March 2014, Ms. Merkel put her domestic political capital on the line and established Germany as a key European geopolitical power: She took on Mr. Putin. With him on the verge of annexing Crimea, the typically soft-spoken chancellor warned that Russia faced “massive damage,” economically and politically, if it continued intervening in Ukraine.

And, as it had at the peak of the eurozone crisis, the German-inspired consensus hid further strains on European unity.

On the EU’s eastern periphery, Germany’s leadership on Ukraine stirred discomfort. Even as Berlin pushed for sanctions, it urged hawkish Western diplomats to avoid provoking Russia by such steps as stationing more NATO troops closer to Russia.

Poland and the Baltic states said troops were needed for their security. The dispute over how to deal with Russia prompted a senior Polish official to exclaim, in one meeting last summer, that Germany was again toying with Poland’s existence—alluding in part to the 1939 Nazi-Soviet nonaggression pact that effectively divided Poland between Russia and Germany.

Other countries, from Italy to Hungary, have chafed at having to put their close ties to Russia on ice amid Ms. Merkel’s push for sanctions.

But to Germany’s south, it is the eurozone crisis that has been the biggest factor in fostering discomfort with Germany’s dominant role on the Continent. In Italy and Spain, opponents of Ms. Merkel have referred to her as the leader of a “Fourth Reich.”

In France, Berlin’s shaping of the crisis response has spawned bitter criticism of Germany, now a popular theme for far-left and far-right alike in a country whose influence used to exceed its neighbors’. In a French poll last December, 74% said Germany had too much sway in European Union politics.

Jean-Luc Mélenchon, founder of the left-wing Parti de Gauche, in May published “Le Hareng de Bismarck—Le Poison Allemand” (“Bismarck’s Herring—the German Poison”), a 208-page denunciation of German supremacy in Europe. Last year, Marine Le Pen of the far-right National Front told Germany’s Der Spiegel magazine Ms. Merkel “wants to impose something on others that will lead to the explosion of the European Union.”

With the crisis in Greece worsening, cracks have started to show in the mainstream. Mr. Hollande, a Socialist, faces a domestic rebellion from members of his parliamentary majority who say he has signed up to German-inspired austerity and abandoned his 2012 election pledge to push pro-growth policies in Europe. Last week, he called on Greece’s creditors to try to reach a solution more quickly.

Within Germany, many politicians and leading commentators say a more assertive German role in Europe is the responsible thing to do. “Politically and economically stable countries cannot hide,” Foreign Minister Frank-Walter Steinmeier said earlier this year. “Germany is a little too big and important to comment on international affairs from the sidelines.”

In March, a prominent Berlin political scientist, Herfried Münkler, published a book, “The Power in the Middle,” that captured the German elite’s foreign-policy Zeitgeist. Germany, he wrote, had the duty to lead Europe because neither Brussels nor another EU country was strong enough to do so.

But in an interview last week, Mr. Münkler said Germany leading Europe alone was “no long-term solution.” For one thing, polls continue to show Germans don’t want more international responsibility. For another, he said, the potential rise of a successful populist party in Germany—as has happened in just about all of Germany’s neighbors, from Poland to the Netherlands to France—would sharpen nationalist rhetoric in Germany and increase Europeans’ aversion to German leadership.

“Germany is in this hegemonic role in Europe because we have no relevant right-wing populist parties,” Mr. Münkler said.

That is why Europe’s current showdown with Greece is critical for the future of Germany’s place in Europe, analysts say.

If Ms. Merkel approves a new lifeline for Athens after weeks of vitriolic debate, she is likely to face a furor from Germany’s right and stoke the country’s incipient euroskeptic movement.

If Greece careens out of the euro, Ms. Merkel will face blame for an episode that has further polarized Europe at a time when controversies over the U.K.’s EU membership and how to treat migrants and refugees are adding to the tensions wrought by the Ukraine crisis.

Claudia Major, a security specialist at the German Institute for International and Security Affairs, said: “If Greece were to leave the eurozone, this may someday be seen as the beginning of the end of the project of European integration—when the Germans were not in the position, as the leading power in shaping Europe, to be able to resolve things with the Greeks.”