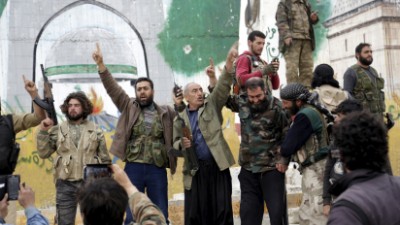 Jaish al Fateh, or Conquest Army, said it had taken over the last Syrian town in Idlib province
Share:

The Syrian army has pulled back from the northwestern city of Ariha after a coalition of insurgent groups seized the last city in Idlib province in northwestern Syria near the Turkish border that was still held by the government.

A coalition of rebel groups called Jaish al Fateh, or Conquest Army, said it had taken over the city. Syria’s al Qaeda offshoot Nusra Front is a major part of the coalition.

The coalition said it had overrun several checkpoints that defended the city. The Syrian army said intense fighting was going on with Nusra forces that had infiltrated Ariha.

“There are heavy clashes between the army and the terrorists of Jabahat al Nusra who infiltrated inside the city,” said an army statement released on state television.

Later the army admitted its forces had pulled back from the city, the latest string of defeats by the Syrian army and a big blow to the morale of President Assad’s government forces who have vowed to defeat Sunni militants financed by Saudi Arabia, Qatar and Turkey who seek to overthrow his rule.

“Units of our armed forces evacuated their positions in Ariha and withdrew to defensive positions in the vicinity of the city after battles it fought facing large number of Nusra terrorists,” the army source was quoted as saying.

A rebel source from Ahrar al Sham confirmed that street fighting was going on inside the city between army fighters and the insurgents. “There are many bodies that litter the streets,” he said, adding that the rebels were searching for Assad’s government forces inside the city.

Many civilians have hidden inside shelters.

Rebel sources say they have secured more U.S.-made TOW missiles in recent months that have helped them to gain a military edge over the Syrian army.

The Nusra Front has made gains in northwestern Syria alongside other insurgent groups in recent weeks, seizing the city of Idlib, the town of Jisr al-Shughour and bringing them closer to government-held coastal areas north of the capital.

The loss of Ariha would leave the insurgents in control of most of Idlib a region that borders Turkey and neighbors President Assad’s heartland in Latakia province on the Mediterranean coast.

The city, once home to more than 80,000 people, is strategically located on the main army supply lines between Idlib and Latakia.

Rebel sources said that convoys carrying army forces had fled to Oroum al Jouz, an area west of Ariha and in areas closer to President Assad’s ancestral homeland. The army did not comment.

Nusra Front is also a major force against government forces and allied militia around the northern city of Aleppo. It is fighting in southern Syria as well, and its combatants have frequently clashed with Islamic State.

Syria’s four-year-old civil war has killed a quarter of a million people and driven nearly 8 million from their homes.
REUTERS