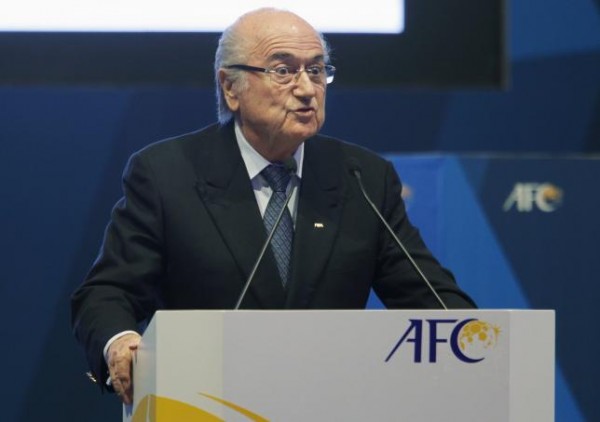 With FIFA facing the worst crisis in its 111-year history, Michel Platini, who heads Europe’s soccer confederation UEFA, said he had told Blatter to go “with tears in my eyes”, but the 79-year-old had refused.

“I said, ‘I’m asking you to leave, FIFA’s image is terrible.’ He said that he couldn’t leave all of a sudden,” Platini, a former French international, told reporters.

In a bullish speech opening a FIFA Congress in Zurich, Blatter said the turbulence of the last two days, which included the arrest of leading soccer officials at their luxury Swiss hotel, had brought “shame and humiliation” to world soccer.

Making his first public appearance since Wednesday’s dramatic events, which were triggered by a U.S.-led investigation into allegations of rampant bribe-taking, Blatter said there was no room “for corruption of any kind”.

“The events of (Wednesday) have cast a long shadow over football and this Congress,” said Blatter, who is standing for a fifth mandate as FIFA president in Friday’s election, in which Prince Ali bin Al Hussein of Jordan is his only challenger.

Ignoring calls to step down, Blatter said: “I know many people hold me ultimately responsible … (but) I cannot monitor everyone all the time. If people want to do wrong, they will also try to hide it.”

Platini said 45 or 46 of UEFA’s 53 member associations would vote for Prince Ali. But it appeared that Blatter still commanded enough of FIFA’s 209 national associations to secure victory.

Adding to the pressure, there were growing concerns about the allegations from major sponsors, many of whom have solidly backed FIFA despite nearly 20 years of bribery and corruption allegations.

German sportswear company Adidas said FIFA should do more to establish transparent compliance standards. Anheuser-Busch InBev, whose Budweiser brand is a sponsor of the 2018 World Cup, said it was closely monitoring developments.

In a strongly worded statement, Visa said: “Our sponsorship has always focused on supporting the teams, enabling a great fan experience, and inspiring communities to come together and celebrate the spirit of competition and personal achievement … it is important that FIFA makes changes now so that the focus remain on these going forward. Should FIFA fail to do so, we have informed them that we will reassess our sponsorship”.

Coca-Cola Co, another sponsor, said the charges had “tarnished the mission and ideals of the FIFA World Cup and we have repeatedly expressed our concerns about these serious allegations”.

In countries whose nationals were indicted in the United States, more investigations were under way.

An judge in Argentina ordered the arrest of three businessmen accused of conspiring to win and keep hold of lucrative media rights contracts from regional soccer federations through the payment of up to $110 million in bribes.

In Brazil, the Senate, led by former national soccer star Romario, now a legislator, moved to open a formal inquiry into bribes that authorities said were paid obtain contracts with the Brazilian Soccer Federation.

Meanwhile, the Miami-based Confederation of North, Central American and Caribbean Association Football (CONCACAF) president Jeffrey Webb, who was among those arrested, has been provisionally dismissed from his role, the confederation said on Thursday.

Blatter appeared confident despite the dawn raid by plainclothes police on Wednesday that left seven of the most powerful figures in international football in Swiss custody and facing extradition to the United States on corruption charges.

All seven are contesting extradition, but lawyers said the process could be completed within months.

Nine soccer officials and five sports media and promotions executives were charged by U.S. prosecutors with corruption they said involved more than $150 million in bribes.

Swiss authorities have also announced a criminal investigation into the awarding of the next two World Cup tournaments, which are being hosted in Russia in 2018 and Qatar in 2022.

Both countries have denied any suggestion of wrongdoing over their bids to host one of the world’s top sporting events, and Russian President Vladimir Putin accused the United States on Thursday of meddling in an effort to prevent the re-election of Blatter.

“This is yet another blatant attempt to extend its jurisdiction to other states,” Putin said, adding that Russia would continue to support Blatter.

The FIFA Congress formally got under way on Thursday evening. In the past, the likes of Grace Jones have set the hearts racing of the older men in suits who comprise most of the gathering’s constituency.

But times have changed.

The evening was billed as a rather more subdued affair than normal under the banner “Game of Joy, Game of Hope” with dancers and musicians on stage followed by a grand buffet afterward.

The serious business starts on Friday morning in Zurich’s Hallenstadion, which is where the announcement of the 2018 and 2022 World Cup venues was made in 2010, decisions which lie at the heart of much of FIFA’s current malaise.

With splits opening in the world game, the Asian and African confederations backed Blatter for president, while Western countries said he must go.

British Prime Minister David Cameron backed Prince Ali’s candidacy and said there was a strong case for a change of leadership at FIFA. Britain has long been a critic of FIFA and bid for the 2018 World Cup which was awarded to Russia.

Canada will not support Blatter
Canada, which is hosting the 2015 FIFA Women’s World Cup, will not support incumbent Sepp Blatter in Friday’s presidential vote at the FIFA Congress, the head of the Canadian Soccer Association said on Thursday on his official Twitter account.

Victor Montagliani said Canada will instead support the only other candidate, Prince Ali bin Al Hussein of Jordan.

“Our (Board of Directors) met and has made the decision of voting for Prince Bin Ali Hussein as we cannot support the current political leadership of FIFA,” he tweeted.

“We want to be front and center on ensuring that the reforms that happens in world football are done in a transparent way but quicker fashion.”

The first match of FIFA Women’s World Cup Canada 2015 will be on June 6 in Edmonton, Alberta, with the final in Vancouver on July 5.