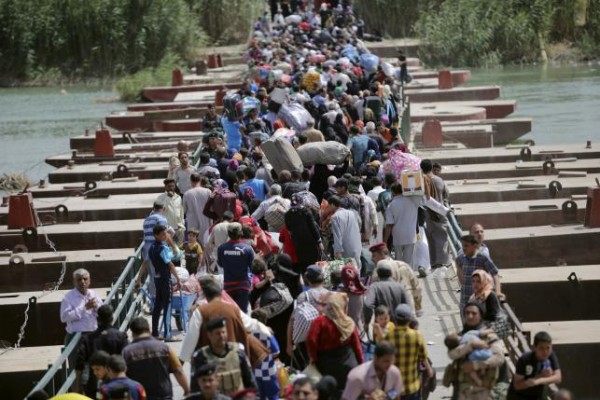 Displaced Sunni people, who fled the violence in the city of Ramadi, arrive at the outskirts of Baghdad, April 17, 2015. REUTERS/Stringer
Share:

Almost a year after Islamic State’s shock capture of Mosul, Iraq’s second city, the black flags of the jihadis have been raised over Ramadi, the capital of Anbar province to the west of Baghdad, seat of Iraq’s increasingly theoretical central government.

Nobody talks of Mosul or recapturing it from Islamic State. It is a forgotten city. Now it is all about the fall of Ramadi, the neighboring ancient Syrian city of Palmyra in central Syria and beyond – the Libyan city of Sirte, hometown of former leader Muammar Gaddafi.

To the eyes of many in the region, the real strategic loss behind the IS seizure of two Sunni cities in Iraq and Syria in a week is the evaporation of any Sunni alternative to the jihadis.

Although many leaders dismissed IS as vainglorious when it declared its cross-border caliphate in eastern Syria and western Iraq last summer, in its cohesion and purpose it is now seen by some – particularly Iraq’s minority Sunnis – as more of a state than the Iraqi government it is fighting.

“Simply put, the Islamic State is, or is on the verge of becoming, what it claims to be: a state,” wrote David Kilcullen who was a key player in the US 2007-08 Iraq troop ‘surge’ and a close observer of the rise of Islamic State.

He argues that unless Washington and its allies urgently change their counter-terrorism strategy the threat will only get worse. A coalition including the United States has been engaged in air strikes against Islamic State last summer, yet the group’s advance has continued.

“ISIS fights like a state… It fields more than 25,000 fighters, including a hard core of ex-Baathist professionals and Qaeda veterans. It has a hierarchical unit organization and rank structure, populated by former regular officers of Saddam Hussein’s military,” added Kilcullen in the Australian Quarterly Essay.

The Islamic State already has the foundations of a state.

It controls territory that includes major cities and covers a third each of Iraq and Syria; it has its own military and security force, a self-proclaimed administration that runs daily life – schools, government offices, utilities, hospitals, taxation and a judiciary system that follows sharia law.

Its resources are vast, including oilfields, refineries and agricultural land. It operates more like a regular army with a recruiting network, training camps and a propaganda machine.

In videos released by IS, its fighters and leader Abu Baqr al-Baghdadi confidently predict “the liberation of Anbar is the start of the liberation of Baghdad and Kerbala from the rawafed” – a derogatory term Sunni jihadis use to describe Shi’ites they condemn as infidels and idolaters.

The jihadis, who intersperse these propaganda films with shots of their training, along with religious slogans, look young, fit, well-armed and clad in crisp new military uniforms – not the picture offered by their opponents.

The Iraqi army crumbled in Ramadi in much the same way as it evaporated last summer when IS seized Mosul and overran swathes of north and central Iraq.

Iraq’s security forces were not “driven from” Ramadi, Gen Martin Dempsey, chairman of the US joint chiefs of staff said acidly in Brussels, they “drove out of Ramadi”.

Just as important, the fall of this strategic city comes only weeks after IS itself was pushed out of Tikrit further north, exciting premature speculation that the jihadis might be on the run. The group’s capture of Ramadi happened in tandem with its seizure of Palmyra, with its two millennia-old Roman columns and priceless antiquities.

IS needed no more than a few hundred fighters to take Palmyra, highlighting the acute manpower shortage faced by Bashar al-Assad’s government, now into its fifth year of a civil war that has claimed more than 220,000 lives and displaced around half of Syria’s population.

Palmyra, or Tadmur in Arabic, is a world heritage site the jihadis might now destroy, as they did the ancient Assyrian city of Nimrud this year.

It has great strategic and symbolic value for IS, with nearby gas fields, and roads to the capital Damascus, Homs, the cradle of the revolt against Assad in Syria’s center, and to the south.

The fall of Ramadi is potentially devastating to the Iraqi government. It is the capital of the vast Anbar province, which stretches to Iraq’s western border with Jordan and Syria.

This was the launchpad of the Sunni jihadi insurgency against the American occupation after the US-led invasion of 2003. Islamic State now controls most of it and can threaten the western approaches to Baghdad, or even strike south into the Shi’ite heartland – as its propaganda videos threaten.

The Shi’ite-dominated government in Baghdad last year appointed Haidar al-Abadi as prime minister to replace Nuri al-Maliki, whose policies were seen as authoritarian and sectarian by Iraq’s alienated Sunni minority and Kurds, who run their own self-governing region in northern Iraq.

Backed by the United States and by Iran, Abadi has tried to be more inclusive, but the collapse of the Iraqi army leaves him reliant for ground troops on Shi’ite militia, trained and influenced by Iran, which were a primary cause of the alienation of these minorities in the first place.

Meanwhile, the government has failed to deliver on promised arms and training for Sunni tribal militia that drove IS’s predecessors from al-Qaeda out of Anbar in 2006-09.

This fits the IS narrative, that the fall of Ramadi shows that a Shi’ite majority government will never provide the arms that those Sunni tribes in Anbar would need if they were to oppose the jihadis, and therefore there is no alternative to IS.

As in Syria, furthermore, the striking battlefield successes of the jihadis are a powerful recruiting sergeant for disaffected Sunni youth.

Hassan Hassan, a Middle East analyst and author of a book on IS, says the real significance of Ramadi is that its Sunni tribes had been resisting the self-declared caliphate ever since Mosul fell and even long before.

U.S. and Iraqi talk of reviving the Sahwat (awakening) – the U.S.-armed Sunni militia that earlier defeated al-Qaeda – is now probably too late.

“The debate within the Sunni community in Iraq is now about those Sunnis in Ramadi who were cooperating with the government against Daesh (an Arabic acronym for IS) but have lost and were not capable to confront them. Other Sunni cities resisting Daesh will now think twice”.

Now confronted on the Ramadi frontline by Hashd al-Shaabi, the powerful, pro-Iranian and Shi’ite People’s Mobilisation militia that was blamed for violent reprisals against Sunni civilians after the fall of Tikrit, “the Sunnis are accepting Daesh as their Sunni army”, Hassan says.

“The moment has passed for the Americans to recruit Sunnis to fight the terrorist organization. This is past, it’s gone, it’s too late. Ramadi has been an idea for 10 years now and it collapsed”, Hassan says. “That is a watershed moment for Iraq”.

Tikrit, moreover, was no victory, Anthony Cordesman, an Iraq expert at the Centre for Strategic and International Studies in Washington, wrote this week.

“Tikrit was a campaign that failed to give Iraq’s Sunnis the reassurance they needed that the central government would support them in resisting ISIS or following up an ISIS defeat with immediate efforts to secure Tikrit and allow its Sunni Arab population to return.”

Ramadi and Tikrit taken together, in that light do not cancel each other out so much as demonstrate that the Sunnis cannot depend for their security either on the United States or on forces loyal to Iran. With insufficient means of their own, that is driving them toward the Islamic State.

“Local Sunni populations in IS-controlled areas may hate the group, but they often see the alternatives as even worse, in part because the militias have committed sectarian abuses after recapturing IS territory, but also because IS is still peddling sectarian fear of Shi’ites, or of the chaos that would result from its fall, presenting itself as defender of the Sunnis,” Kilcullen said.

“Western countries have a clear interest in destroying ISIS, but counter-insurgency should not even be under discussion. This is a straight-up conventional fight against a state-like entity, and the goal should be to utterly annihilate ISIS as a state.”