21 killed by a suicide bombing at Saudi Shi’ite mosque. IS claims responsibility 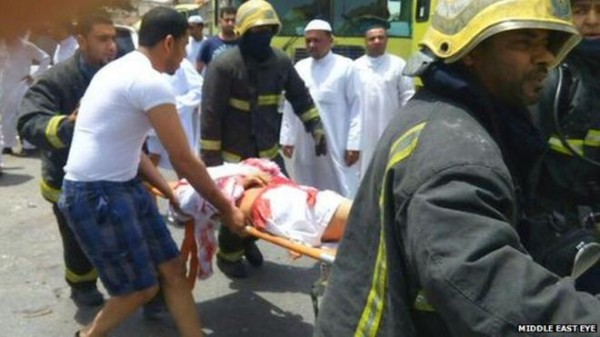 A suicide bomb attack at the Imam Ali mosque in the village of al-Qadeeh in the eastern province of Gatif, Saudi Arabia KILLED 21 , May 22, 2015. REUTERS/STRINGER
Share:
A suicide bomber killed 21 worshippers on Friday in a packed Shi’ite mosque in eastern Saudi Arabia, residents and the health minister said, the first attack in the kingdom to be claimed by Islamic State militants.

It was one of the deadliest assaults in recent years in the largest Gulf Arab country, where sectarian tensions have been frayed by nearly two months of Saudi-led air strikes on Shi’ite Houthi rebels in neighboring Yemen.

More than 150 people were praying when the huge explosion ripped through the Imam Ali mosque in the village of al-Qadeeh, witnesses said.

A video posted online showed a hall filled with smoke and dust, with bloodied people moaning with pain as they lay on the floor littered with concrete and glass. More than 90 people were wounded, the Saudi health minister told state television.

“We were doing the first part of the prayers when we heard the blast,” worshipper Kamal Jaafar Hassan told Reuters by phone from the scene.

Islamic State said in a statement that one of its suicide bombers, identified as Abu ‘Ammar al-Najdi, carried out the attack using an explosives-laden belt that killed or wounded 250 people, U.S.-based monitoring group SITE said on its Twitter account. It said it would not rest until Shi’ites, which the group views as heretics, were driven from the Arabian peninsula.

Saudi officials have said the group is trying hard to attack the kingdom, which as the world’s top oil exporter, birthplace of Islam and champion of conservative Sunni doctrine, represents an important ally for Western countries battling Islamic State and a symbolic target for the militant group itself.

In November the Sunni group’s leader Abu Bakr al-Baghdadi called for attacks against the Sunni rulers of Saudi Arabia, which has declared Islamic State a terrorist organization, joined international air strikes against it, and mobilized top clergy to denounce it.

Last week Baghdadi issued another speech laden with derogatory comments about the Saudi leadership and the country’s Shi’ite minority.

Friday’s bombing was the first attack targeting minority Shi’ites since November, when gunmen opened fire during a religious celebration in al-Ahsa, also in the east where most of the group live in predominantly Sunni Muslim Saudi Arabia.

The Saudi Interior Ministry described the attack as an act of terrorism and said it was carried out by “agents of sedition trying to target the kingdom’s national fabric”, according to a statement carried by state news agency SPA.

The agency quoted an Interior Ministry spokesman as saying the bomber detonated a suicide belt hidden under his clothes inside the mosque.

“Security authorities will spare no effort in the pursuit of all those involved in this terrorist crime,” the official said in a statement carried by state news agency SPA.

A hospital official told Reuters by telephone that “around 20 people” were killed in the attack and more than 50 were being treated, some of them suffering from serious injuries. He said a number of other people had been treated and sent home.

In April, Saudi Arabia said it was on high alert for a possible attacks on oil installations or shopping malls.

In Beirut, Lebanon’s Hezbollah, an ally of Saudi Arabia’s regional rival Iran, condemned the attack but said authorities in the kingdom itself bore responsibility.

“Hezbollah holds the Saudi authorities fully responsible for this ugly crime, for its embrace and sponsorship for these criminal murderers … to carry out similar crimes in other Arab and Muslim countries,” the Shi’ite group said in a statement.

The statement appeared to echo Iranian accusations that Saudi Arabia sponsors ultra-orthodox Sunni militant groups in the region, an allegation usually taken to refer to groups such as Islamic State and al Qaeda. Riyadh denies the allegations.

In Yemen, a bomb at a Houthi mosque in the capital Sanaa on Friday was also claimed by Islamic State.