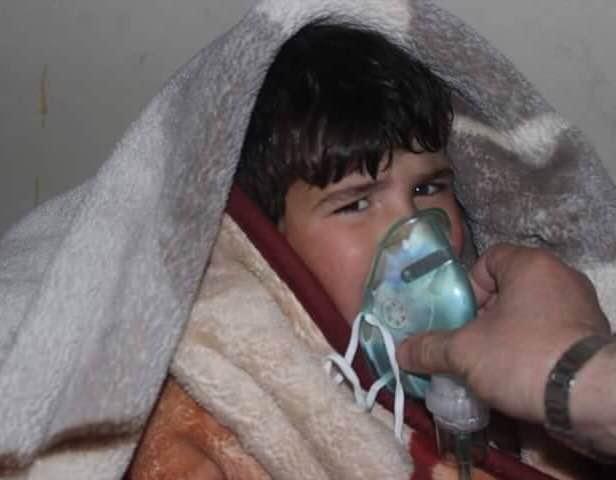 At least 30 people were injured when a chlorine-filled bomb hit the Syrian town of Binnish March 23, 2015. Syrian President Bashar Assad’s forces are accused of carrying out the attack. Syria Civil Defense
Share:
Exactly one century ago Wednesday, German troops opened the taps on a line of chlorine tanks to send a poisonous cloud drifting across no man’s land and into World War I Allied trenches. The gas blinded soldiers and made them retch, vomit and choke, combining with bodily fluids to destroy their lungs.

Reports from Syria about chemical weapons used in that conflict also involve chlorine — a widely available substance that has legitimate industrial and commercial uses. Both government forces and insurgents deny accusations of using the gas.

A report last year by a fact-finding mission set up by the Organization for the Prohibition of Chemical Weapons said a toxic chemical, almost certainly chlorine, was used repeatedly in attacks on villages in Northern Syria.

“Leaves on plants … wilted ‘like autumn leaves,'” it cited witnesses as saying. “In one case, a child standing close to the impact site died later because of exposure to the toxic chemical.”

Both sides denying using chemical weapons while accusing the other of poison attacks.

There was no point in denying it a century ago in Flanders Fields.

The first large-scale use of chlorine as a weapon, at Ieper, Belgium, on April 22, 1915, unleashed massive use of gas by both Germany and the Allies during the last three years of the 1914-1918 war. Chemical weapons killed nearly 100,000 and injured around 1 million more during the conflict.

The horrific scale of World War I gas casualties — and the suffering they caused — helped launch what has been hailed as one of the most successful disarmament campaigns in history. It culminated in the 1997 Chemical Weapons Convention and creation of the Hague-based Organization for the Prohibition of Chemical Weapons. The watchdog with 190 member states won the Nobel Peace Prize in 2013.

The OPCW’s director-general, Ahmet Uzumcu, said in a recent speech that all chemical weapons across the 98 percent of the world covered by his organization’s members will be destroyed “within this decade.”

“That amounts to more than 70,000 metric tons of chemical agent,” Uzumcu said. “To put this figure into perspective, it takes only one drop of much of this agent to kill an adult instantly.”

Despite that success and global condemnation of poison gas and nerve agents, deadly chemical attacks have continued throughout the past century.

Iraqi dictator Saddam Hussein was the worst offender. He was accused of using mustard gas and the nerve agent taubun in his country’s war with neighboring Iran, as well as his 1987-88 crackdown on Iraq’s Kurdish minority.

The most notorious case was in the village of Halabja, where some 5,000 people were killed by poison gas.

Photos taken after the Halabja attack on March 16, 1988, showed bodies of men, women, children and animals lying in heaps on the streets.

While the state-organized attack on Halabja shocked the world, a deadly nerve agent attack on the Tokyo subway marked the emergence of a new threat: terrorists getting their hands on toxins.

In 1995, 13 people were killed and about 6,000 sickened when packages containing the nerve agent sarin were leaked on five separate subway trains by members of the Aum Shinrikyo cult.

Meanwhile, the world’s two biggest owners of chemical weapons, the United States and Russia, are methodically destroying their stockpiles.

Russia has destroyed about 86 percent of its stockpile, and the U.S. about 90 percent. Russia is expected to finish destruction by the end of 2020 and the U.S. by September 2023.

Syria joined the OPCW in 2013 to ward off the possibility of U.S. airstrikes after President Assad was accused of a deadly chemical weapons attack on a Damascus suburb. The country admitted owning about 1,300 tons of chemical weapons and ingredients for making toxic gas and nerve agents.

An unprecedented international effort swung into action to remove the most dangerous chemicals from the country and destroy them all, though questions remain about whether the Assad regime reported all its stocks to the OPCW.

While the days of nations building up huge stockpiles of chemical weapons appear to be largely over, fears of chemical attacks using chlorine are not — as recent reported use of the chemical in Syria underscores.

“So we come back to entities not engaging in the development or production of warfare agent but using what is available … ‘off the shelf,'” said chemical weapons expert Jean Pascal Zanders. “It’s almost a logical outgrowth of the success of chemical disarmament that one would go back to some very elementary things.”