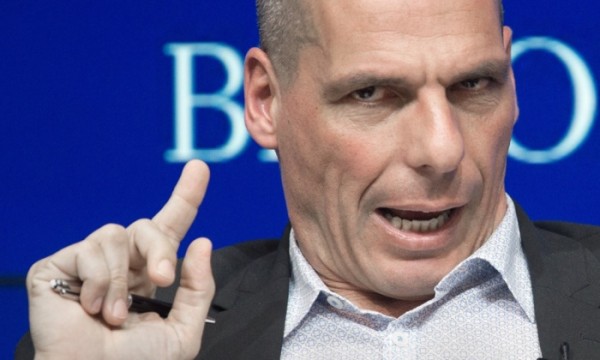 The Greek finance minister, Yanis Varoufakis, speaking at the Brookings Institute in Washington. Greece is due to repay almost €1bn to the IMF in early May. Photograph: Paul Richards/AFP/Getty
Share:
Eurozone officials meet for further crunch talks on Greece this week amid warnings that time is running out for the country to avoid defaulting on its debts and being jettisoned from the single-currency bloc.

Deputy finance ministers will convene on Wednesday to pave the way for talks among finance chiefs in the Latvian capital, Riga, at the end of the week, a Greek government official told Reuters.

But investors are increasingly sceptical that a rescue deal can be reached between Greece and its creditors. Financial markets do not expect a breakthrough at that meeting of the so-called Eurogroup – the eurozone’s finance ministers – and focus is already shifting to early May when Greece is scheduled to repay almost €1bn (£700m) to the International Monetary Fund – a sum most experts say Athens will not be able to raise.

Greece’s recently elected leftwing-led government has so far failed to present a package of reforms to the IMF and its eurozone partners that those creditors deem serious enough to unlock the remaining bailout funds.

“Although time is running short, there are clear indications that the Eurogroup meeting in Riga on 24 April might not bring a breakthrough,” said Reinhard Cluse, an economist at the bank UBS.

“In the absence of a deal in the next few weeks, the government might not be able to avoid default, which – we fear – would likely raise the risk of ‘Grexit’ [a Greek exit].”

Greece faces a series of repayments and interest payments on its debts in the coming weeks as well as its usual pensions and public-sector salary obligations. Experts say money is running out.

“As to how much funds they have left to pay back maturing debt, it is almost zero,” said Gabriel Sterne at the consultancy Oxford Economics. “It is more of a question of what barrel they can still scrape to find some money to stave off default.”

Greece owes money to the IMF, theEuropean Central Bank (ECB) and the European commission following two bailouts in 2010 and 2012.

Athens is waiting for the final €7.2bn payment under the second rescue package, but that money has been held up after the new anti-austerity government scrapped previous commitments to privatise state assets and cut welfare provision.

Germany in particular has made it clear that it wants strong commitments to reforms. The country’s finance minister, Wolfgang Schäuble, has said there is not enough detail from Greece for rescue funds to be released and has expressed scepticism that any progress will be made in Riga.

There was, however, some support for Greece’s position at last week’s IMF meeting in Washington where Poul Thomsen, head of the fund’s European department, said the reforms being demanded from Athens should be slimmed down.

Further ahead, economists warn that a €7.2bn package would merely buy some time for Athens but by no means guarantee Greece could remain in the eurozone – something polls suggest most Greeks want.

Even if Greece could get help to meet payments to the IMF on 1 May and 12 May, a “really big crunch” looms in July and August when €6.7bn of bonds held by the ECB mature, said Alastair Winter, chief economist at the broker Daniel Stewart.

“Nobody in Greece – or outside for that matter – is facing up to the reality that a lot more than the final €7.2bn will be needed,” said Winter. “The result will be growing chaos in Greece, and discord and disarray in the eurozone in the coming months.”

Such concerns are growing on financial markets. Jitters about Greece in effect becoming bankrupt and being forced to leave the currency union pushed up the yields of government bonds from other countries on the eurozone’s periphery last week. Yields were all higher – meaning prices were down – on Portuguese, Spanish and Italian bonds on Friday.

At the same time, yields on benchmark 10-year German government bonds, orbunds, fell to a record low of 0.05%, reflecting their perceived safe-haven status among investors. Yields on shorter dated German bonds are already negative, meaning people are in effect paying the German government to park money with it.

“A fraught week lies ahead, primarily for Greece, but also perhaps for euro-area equity markets and bond markets in the euro-area periphery. And negative yields on 10-year bunds seem likely to be reached,” they wrote in a research note.

While economists appear divided over whether a Greek exit from the eurozone would lead to full-scale break-up of the monetary union, the ECB president, Mario Draghi, has sought to allay such fears.

Draghi said at the IMF’s meetings in Washington over the weekend that financial buffers were sufficient to prevent contagion spreading to other weak economies in the currency union. But he warned that Europe would be entering “uncharted waters” that made the outcome of a default uncertain.