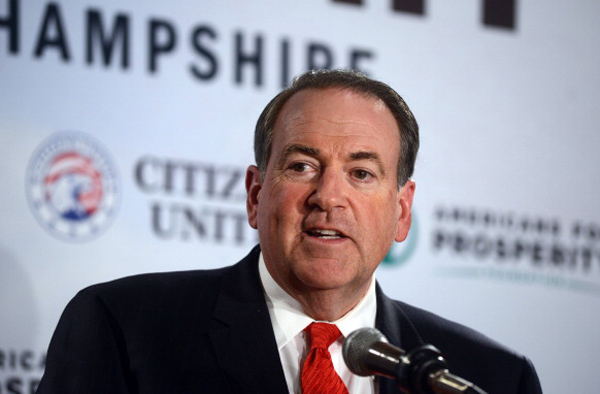 Former Arkansas Gov. Mike Huckabee told New Hampshire Republicans on Saturday that President Barack Obama’s policies have so failed the Middle East that they have aligned Israel with other regional nations because of fears of a nuclear Iran.

“Now, the Israelis are in a greater alliance with the Saudis, Jordanians, and Egyptians than they are with the United States — because those countries at least have the good sense to know you don’t trust the Iranians,” Huckabee told several hundred people at the Republican Leadership Summit in Nashua.

Huckabee, 59, who said Friday that he would announce his 2016 presidential plans on May 5, was among 19 presidential hopefuls and announced candidates who spoke during the two-day event, sponsored by the New Hampshire Republican Party.

“I pray our next president will have the good sense to know we don’t trust the Iranians, but we can trust our friends, the Israelis — and we can trust the leadership of other countries in the Middle East, who recognize that you cannot create peace when you chant ‘Death to America’ in the streets of your cities,” Huckabee said.

The former governor, who responded to an audience member’s question on Israel, said that he could see an Islamic State terrorist camp in Syria within two miles of where he stood on a recent visit to the Golan Heights.

“In the distance, we could hear at least 10 explosions of rockets and shells going off in the civil war of Syria,” Huckabee said. “We were safe where we were, and the reason we were was because Israel understands what it is to defend its borders and recognizes that it does have a right to defend itself and its people.”

He said that the idea of a two-state solution with Israel and the Palestinians was “the nuttiest thing I’ve ever heard.

“One of those parties believes the other one should not exist,” added Huckabee, who said he first visited Israel 42 years ago. “Let’s quit pretending there is such a thing in that particular country.

He also called for congressional term limits and a “fair” tax that is paid only at the point of purchase because “the IRS has become a criminal enterprise, and we need to get rid of it.”

“The fact that the Middle East is in extraordinary trouble — and that our president thinks we can sit down and make a deal with the Iranians, is nonsense,” he said. “They’ve never made a deal they’ve kept, never.”
NEWSMAX