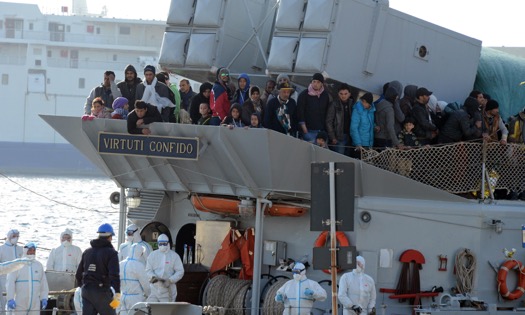 As many as 700 people were feared dead after a fishing boat packed with migrants capsized off the Libyan coast overnight, in what may be one of the worst disasters of the Mediterranean migrant crisis, officials said on Sunday.

Twenty eight people were rescued and 24 bodies recovered from the 20 meter-long vessel, which sank around 70 miles from the Libyan coast, south of the southern Italian island of Lampedusa, the Italian coast guard said.

If confirmed, the death toll would bring the total number of dead since the beginning of the year to more than 1,500 as the flow of migrants seeking to flee poverty, war and insecurity in sub-Saharan Africa and the Middle East has continued.

“A tragedy is unfolding in the Mediterranean, and if the EU and the world continue to close their eyes, it will be judged in the harshest terms as it was judged in the past when it closed its eyes to genocides when the comfortable did nothing,” Maltese Prime Minister Joseph Muscat said.

“They are literally trying to find people alive among the dead floating in the water,” Muscat said.

There was still no decision on where the survivors and the bodies that had been recovered would be taken.

The boat is believed to have capsized when the migrants shifted to one side of the overcrowded vessel as a merchant ship approached.

“The first details came from one of the survivors who spoke English and who said that at least 700 people, if not more, were on board. The boat capsized because people moved to one side when another vessel that they hoped would rescue them approached,” said Carlotta Sami, a spokeswoman for the United Nations High Commissioner for Refugee.

“LOOKING FOR A BETTER LIFE”

Pope Francis, who has spoken out repeatedly on the migrant crisis, repeated his call for quick and decisive action from the international community.

Italian Prime Minister Matteo Renzi, who returned to Rome from a political event he was attending in Mantua, spoke by telephone to French President Francois Hollande. He was expected to hold a meeting with ministers later on Sunday.

The German government’s representative for migration, refugees and integration, Aydan Ozoguz, said that with more arrivals likely to arrive as the weather turned warmer, emergency rescue missions should be restored.

“It was an illusion to think that cutting off Mare Nostrum would prevent people from attempting this dangerous voyage across the Mediterranean,” she said.

Aid groups have called for the opening of a “humanitarian corridor” to ensure the safety of the migrants but there were also calls for action to prevent the boats from leaving.

The leader of the anti-immigrant Northern League party, Matteo Salvini, who has made migration one of the centerpieces of his political agenda, called for an immediate naval blockade of the coast of Libya.

“We need to stop the business of the people smugglers. We need to set up reception centers in Tunisia, Morocco, Egypt, Libya and wherever else is possible,” he said.

Libya’s lawless state, following the toppling of former leader Muammar Gaddafi in 2011, has left criminal gangs of migrant smugglers free to send a stream of boats carrying desperate migrants from Africa and the Middle East.

Around 20,000 migrants have reached the Italian coast this year, the International Organisation for Migration (IOM) estimates. That is fewer than in the first four months of last year, but the number of deaths has risen almost nine-fold.

In 2013, the previous government initiated the search-and-rescue operation “Mare Nostrum” or “Our Sea” after hundreds drowned in an incident off the coast of Lampedusa. The operation was canceled last year, because of the cost and because some politicians said it encouraged migrants to depart by raising their hopes of being rescued.

Mare Nostrum made way for the European Union’s border control mission, Triton. However Triton, which has a much smaller budget and which only operates within 30 miles of the Italian coast, has been criticized by humanitarian groups and Italy as inadequate to tackle the scale of the problem.