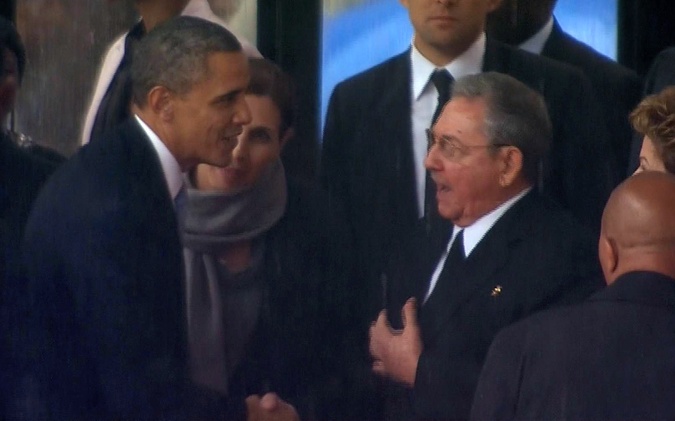 This was the handshake that shook the Western Hemisphere.

President Obama briefly met his Cuban counterpart, Raul Castro, on Friday night at a dinner for the dozens of Latin American leaders convening in Panama City for the Summit of the Americas.

This was historic. The two nations have barely been on speaking terms — officially — for more than 50 years.

The meeting was so important that Bernadette Meehan, National Security Council spokesperson, issued a statement: “At the Summit of the Americas this evening, President Obama and President Castro greeted each other and shook hands.”

Cuba and the United States had endured a half-century of enmity, the tension worsened by the two nations being only 90 miles apart. Key events of those years include some of the most traumatic in modern U.S. history, such as the Cuban Missile Crisis, the Bay of Pigs and the Mariel boatlift of 1980.

But the two leaders have been building up to the historic face-to-face.

Obama spoke by phone Wednesday with the Cuban leader before heading to Panama. They met Friday at the dinner and are expected to spend a lot more time together on Saturday when the summit begins in earnest.

Obama arrived in Panama late Thursday for the conference, which in years past was tinged with animosity at Cuba’s exclusion. Moments after Marine One, Obama’s helicopter, touched down in Panama City, Castro’s plane landed on the same tarmac. Panamanian television carried both arrivals live.

During their phone call Wednesday, Obama and Castro discussed the ongoing process of normalizing relations between the United States and Cuba, according to Deputy National Security Adviser Ben Rhodes. He said it “made sense” for the two leaders to communicate before their anticipated interactions Friday and Saturday.

Those run-ins will represent the highest-level talks between the United States and Cuba since a meeting between then-Vice President Richard Nixon and then-Prime Minister Fidel Castro in 1959.

“We’re in new territory here,” Rhodes said on Friday. “The reason we’re here is that the President strongly believes that an approach that was focused totally on isolation, focused totally on seeking to cut off the Cuban people from the United States of America had failed.”

Obama was expecting a warm welcome from the dozens of countries represented at the conference, after announcing in December he was seeking to engage Havana in talks over reopening embassies and removing barriers to commerce and travel.

In Panama, Obama is expected to announce he’s removing Cuba from the United States’ list of countries that sponsor terrorism, a major advance in building diplomatic ties between the two countries.
The State Department delivered its report on the designation to the White House on Wednesday; Obama said on Thursday a panel of experts was reviewing it before he makes a final determination. The White House isn’t ruling out a final decision before Obama leaves Panama late Saturday night.

In remarks during a brief stopover in Jamaica on Thursday, Obama strongly hinted he was ready to remove Cuba from the list, which also includes Iran, Sudan and Syria.

“Throughout this process, our emphasis has been on the facts,” Obama said. “So we want to make sure that given that this is a powerful tool to isolate those countries that genuinely do support terrorism, that when we make those designations we’ve got strong evidence that, in fact, that’s the case.”

“As circumstances change, then that list will change as well,” he said.

While some inside Cuba have expressed dissatisfaction at the pace of the diplomatic thaw, U.S. officials say they’re pleased at the progress toward re-establishing diplomatic ties, which the White House argues has helped improve relations with other countries in the region.

Obama said in Jamaica he “never foresaw that immediately overnight everything would transform itself.”

The overtures to Cuba have not been universally popular in the United States; some lawmakers were irate that Obama was seeking to engage what they regard as a corrupt government.

Even as Obama landed in Panama the long-standing tensions between pro- and anti-Castro activists was on full display. Dissidents opposed to Castro’s regime were violently accosted earlier this week by supporters of the Cuban government.

Rhodes said the White House had “expressed serious concerns” about the violence and would continue to speak in support of human rights reforms on the island.